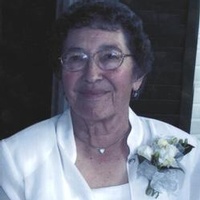 Ernestine G. Sena, 86 of Fort Sumner, NM passed away Saturday, November 28, 2015 at Heartland Continuing Care Center in Portales following an illness. She was born July 6, 1929 in Dilia, NM to the home of Jose Rosauro and Juanita (Casaus) Gallegos. She attended schools in Dilia. She made her home in Fort Sumner where she worked as a teenager for Vick's Laundromat. She later worked in the Fort Sumner schools cafeteria for over 31 years. She married Anastacio Trujillo Sena on March 5, 1946 in Fort Sumner. Mrs. Sena enjoyed travelling with her family, drinking coffee with her friends, she spent many hours cleaning her home and enjoyed preparing meals for her family. She was a longtime member of St. Anthony Catholic Church in Fort Sumner. Ernestine is preceded in death by her parents, her husband Anastacio "A.T." Sena on February 27, 2002, three sisters, Florence Gallegos, Cecilia Grenier, and Rosarito Gallegos. She is survived by two daughters Esther Segura and husband Pete of Fort Sumner, Evelyn Baeza and husband Nestor of Odessa, TX, three sons Jose Felix Sena and wife Conny of Albuquerque, Deacon Edward A. Sena and wife Linda, and Leo Sena and wife Yolanda of Fort Sumner. Also surviving is a sister Elsie Gallegos of Fort Sumner, four brothers Raymundo Gallegos of Alamogordo, Jose Rosauro Gallegos and wife Faye of Albuquerque, Guadalupe Joe Gallegos and wife Rosie of Tucson, AZ, and Greg Gallegos and wife Rita of Fort Sumner, 11 grandchildren and 19 great-grandchildren along with a host of nieces, nephews, other relatives and many friends. Visitation hours will be Monday from 11am to 6pm at the funeral home. A rosary will be recited at 7pm Monday, November 30, 2015 from St. Anthony Catholic Church in Fort Sumner. Mass will be celebrated at 10am Tuesday, December 1, 2015 at St. Anthony Catholic Church. Burial will follow at Fort Sumner Cemetery. Pallbearers will be her grandsons Mark Sena, Adam Sena, Luke Sena, John Sena, Josh Sena, and Mike Baeza. Honorary bearers will be all her grandchildren and great-grandchildren. All arrangements are under the direction of Chavez Funeral Home, 830 N. Fifth Street, Fort Sumner, NM. (575) 355-2311.
To order memorial trees or send flowers to the family in memory of Ernestine G. Sena, please visit our flower store.