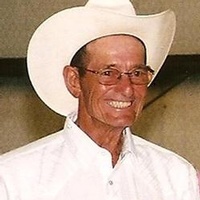 A graveside service for longtime De Baca County rancher, Jack Achen, of Yeso, NM will be held at 10am Saturday, January 9, 2016 at Yeso Cemetery, Mr. Charlie Overton will officiate. Pallbearers will include Lee Groff, Ronnie Merritt, Chris Copeland, Lewis Hisel, Cole Gardner, Dennis Cleaver, James West, and Paul Horney. Honorary bearers will include all his friends and neighbors. Visitation hours will be Friday from 11am to 6pm at the funeral home. Jack Achen, 75 passed away Tuesday, Jan 5, 2016 following an illness. He was born January 29, 1940 in Fort Sumner NM to the home of Marcel and Ethel (Smith) Achen. He was raised in Yeso and attended both Yeso and Fort Sumner Schools. He graduated from Fort Sumner High School. Jack married Tamara K. (Tammy) Szuszitzky on Feb 7, 1959 in Albuquerque. Jack served two years in the U.S. Navy. Following his honorable discharge Jack and Tammy made their home in Yeso, NM in 1961 where they raised their family. Jack was a loving father and husband. Jack loved the ranch: which was his job, hobby and passion. He was a member of the Yeso Baptist church and the Country Church of Yeso. He is preceded in death by his wife and parents. Jack is survived by a son J.O. Achen and wife Marikay of Yeso, NM. A daughter Tracy Fair and husband Andy of Clovis NM, sister Marcie Salopek and husband Mark of Las Cruces NM, brother Ty Achen and wife Adie of Las Cruces NM, eight grandchildren and eight great grandchildren along with a host of nieces nephews, other relatives and many good friends and neighbors. The family prefers contributions in Jack's memory to New Mexico Christian Children's Home, 1356 NM 236, Portales, New Mexico 88130 or online at www.nmcch.org. All arrangements are under the direction of Chavez Funeral Home, 830 N. Fifth Street, Fort Sumner, NM (575) 355-2311.
To order memorial trees or send flowers to the family in memory of Jack Achen, please visit our flower store.