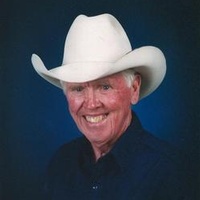 Memorial services for Robert "Bob" Nordtome, 88 of Fort Sumner, New Mexico will be held at 11am Saturday, March 19, 2016 at The Church On The Hill in Fort Sumner with Anna Teeter-Gentile officiating. Military honors will follow the service. Honorary bearers will include Eric Gustavson, Kurt Gustavson, Logan Gustavson, Jarod Gustavson, and Jay Nordtome. Bob passed away at his home Thursday, March 10, 2016 following an illness. He was born October 16, 1927 in Kalispell, Montana to the home of Edward and Amanda (Rocks) Nordtome. He grew up in Kalispell, MT. He served in the US Army from November 13, 1945 to March 16, 1950 as a Sergeant with the 475th Fighter Group. Bob married Mary Gray Loving on October 24, 1990 in Glendale, AZ. Bob worked several years for Big Sky Rodeo as a stock contractor, and later as the Papago Tribal Herd manager, he also worked for the Arizona Livestock Board where he served as a Captain in their Criminal Investigation Unit. He operated Silver Buckle Horse Ranch where he trained and showed horses. Bob was a lifelong rancher and rodeo cowboy. He held a P.R.C.A. Gold Card, was a member of the Law Enforcement Rodeo Association, and a founder of the Arizona Team Penning Association. Bob moved to Fort Sumner in 1996 where he continued ranching. He retired to Melrose, NM in 2007 and recently moved back to Fort Sumner. Bob is preceded in death by his parents. Survivors include his wife Mary G. Nordtome of the home in Fort Sumner, son Jay Nordtome of Salado, TX, stepsons Eric Gustavson of Fort Sumner, Kurt Gustavson and wife Bess of Phoenix, AZ, granddaughter Cassie Nordtome of Kalispell, MT, grandsons Jarod Gustavson and wife Nancy, and Logan Gustavson of Phoenix, one great grandson Cason Marquardt of Kalispell, MT. Arrangements are under the direction of Chavez Funeral Home, 830 N. Fifth Street, Fort Sumner, NM. (575) 355-2311. To place an online tribute or sign the guest book go to www.chavezfuneralhome.com
To order memorial trees or send flowers to the family in memory of Bob Nordtome, please visit our flower store.