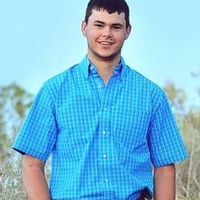 Reed Kenyon, 22 a lifelong resident and farmer in the Fort Sumner valley passed away Monday, March 14, 2016 in an accident. He was born June 28, 1993 in Clovis, the son of Clifford and Molly (Burds) Kenyon. Reed attended Fort Sumner schools where he participated in all sports, and as a member of Business Professionals Association, and National Honor Society, he graduated as Valedictorian of his 2011 class. He was also active in Future Farmers of America, and 4H during his school years. Following graduation he attended Oklahoma State University, and graduated on May 15, 2015 with a Bachelor Degree in Agriculture Business. Following graduation, Reed returned to operate the Kenyon Farms in the Fort Sumner valley. Reed was a member of First Baptist Church in Fort Sumner, he loved to rope, play 42, hunt, golf and especially spend time with his family. He is preceded in death by his paternal grandfather Lawrence Kenyon in 2014, his maternal grandfather Jack Burds in 2013, a cousin Josh Kenyon in 2000, and his longtime friend Colten Gunn in 2011. A loving son, brother, and friend he will be missed by many. He is survived by his parents Clifford and Molly Kenyon of Fort Sumner, a brother Zachary Kenyon (Jozef Springer) of Lubbock, a sister Reagan Kenyon of Fort Sumner and nephew Ezeriah Springer of Lubbock, his paternal grandmother Joyce Kenyon and maternal grandmother Kathleen Burds of Fort Sumner along with numerous aunts, uncles, cousins, other relatives and many friends. Visitation hours for friends and family will be Wednesday, March 16, 2016 from 11am to 6pm at the funeral Home. The family will receive friends from 8-9 pm Wednesday during a visitation period at First Baptist Church. The funeral will be held at 10:00 am Thursday March 17, 2016 at the Fort Sumner High School Gymnasium with Rev. John Russo officiating. Burial will follow in the Garden of Faith, Fort Sumner Cemetery. Pallbearers will include Lathem Wiggins, Jeremy Hobbs, Turner Armitage, Cameron Simmons, Kit Pettigrew, Kolter West, Matt West, Jacob West, Adam West, Caleb West, and Jeffrey Burds. Honorary bearers will be all his many cousins. The Reed Kenyon Memorial Fund has been established at Citizens Bank, P.O. Box 490, Fort Sumner, NM 88119. All arrangements are under the direction of Chavez Funeral Home, 830 N. Fifth Street, Fort Sumner, New Mexico. (575) 355-2311.
To order memorial trees or send flowers to the family in memory of Reed Kenyon, please visit our flower store.