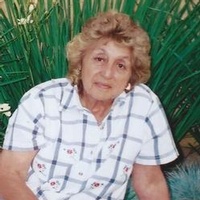 Alice A. Rael, 74 a resident of Clovis, NM passed away Friday, March 25, 2016 at St. Anthony Healthcare in Clovis, NM. She was born May 7, 1941 in Vaughn, NM, the daughter of Elena Madrid. Alice attended schools in Vaughn, NM. She married Noah Margarito Rael on February 4, 1955 in Hereford, Texas. They made their home in Vaughn for several years where they operated a service station, they later moved to Clovis where Noah worked for K. Barnett Construction, and Cannon Air Force Base until retirement. Alice was a member of Our Lady of Guadalupe Catholic Church where she volunteered for several years visiting the homes of shut-ins and nursing homes. She was a member of the Friendship Center. Alice liked to dance, visit the casino, pick pinon nuts, fishing, making arts and crafts, and especially spending time with her family. She is preceded in death by her mother Elena Madrid, her husband Noah Rael in 2002, three daughters Mary Marquez in 2009, Joanne Rael 2015, and Helen Raposa in 2005, two grandchildren Joanne Margaret Baca, and Yvonne Marquez. She was a loving mother, grandmother, sister, and friend and will be missed by her family. She is survived by a daughter Margaret Rael of Clovis, three sisters Betty Rhinehart and husband Bill of Vaughn, Lucia Montoya of Vaughn, Orphela Roybal and husband Alfredo of Vaughn, and a brother Alex Madrid and wife Mary of Fort Sumner. Also surviving are 7 grandchildren, and 19 great-grandchildren along with a host of nieces, nephews, other relatives and many friends. Visitation hours will be Tuesday, March 29th from 11am to 6pm at Chavez Funeral Home in Ft. Sumner and Wednesday from 9am to 10am at St. Mary's Catholic Church, Vaughn, NM. A rosary and funeral Mass will be held at St. Mary's Catholic Church in Vaughn, NM on Wednesday, March 30, 2016 beginning with a Rosary at 10am followed by Mass of Chtistian burial with Father Christopher Bernabe officiating. Burial will follow at Evergreen Cemetery, pallbearers will include Alex Madrid, Noah Baca, Jeremiah Baca, Albert Martinez, Michael Garcia, Benito Flores III, David Sena, and Jimmy Marquez Sr. Honorary bearers will include her son in law Evaristo "Acosta" Corral, and grandchildren Melissa Moya, Yvonne Martinez, Jessica Flores, Jimmy Marquez, George Baca, and Diane Farden. All arrangements are under the direction of Chavez Funeral Home, 830 N. Fifth Street, Fort Sumner, New Mexico. (575) 355-2311. To place an online tribute or sign the guestbook, go to www.chavezfuneralhome.com
To order memorial trees or send flowers to the family in memory of Alice A. Rael, please visit our flower store.