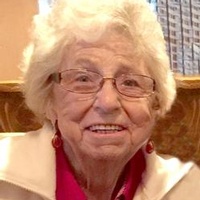 Mavis Rasco, 82 of Puerto De Luna, passed away Sunday morning, March 27, 2016 at her home, her children were at her bedside. She was born September 1, 1933 in Calcis, Alabama to the home of George and Beulah Smith. She grew up in Vincent, Alabama and graduated from Vincent High School in 1952. She married Floyd Rasco on March 13, 1954 in Deming, NM. They made their home in Puerto De Luna in 1963. Mavis was a member of First baptist Church in Santa Rosa, and for the past several years has been a member of United Methodist Church. She was a longtime Sunday School teacher, a member of Eastern Star where she served as Mother Adviser for Rainbow Girls, a Cub Scout Leader, served on the Puerto De Luna Senior Citizens Advisory Committee, Santa Rosa Garden Club and a member of the Evergreen Cemetery Board. She worked for several years as a Program Director for ENMRSH in Santa Rosa. Mavis enjoyed cooking, gardening and sewing. She is preceded in death by her parents, father George Smith in 1975, mother Beulah Smith in 1949, her husband Floyd Rasco on January 2, 2010, along with six brothers and three sisters. She is survived by four daughters, Rena Bond and husband David of Edgewood, Kay Miller and husband Gary of Hobbs, Tambra Mikel and husband Patrick of Prosper, TX, Sherrie Early and husband Ken of New Braunfels, TX, one son George Rasco and wife JimAnn of Amarillo, TX, along with 8 grandchildren and 7 great-grandchildren, other relatives and many friends. A private graveside service will be held at 10:30 Wednesday, March 30, 2016 at Evergreen Cemetery in Santa Rosa. A memorial service will follow at 11:30 am at United Methodist Church with Ernest Copeland officiating. Serving as Honorary Pallbearers will be, Daniel Mikel, Curtis Bond, Dylan Miller, Logan Rasco, Kyle Bond, Jason Mayfield, Doug Dean and Blaize Justice. In lieu of flowers memorial contributions can be made the First United Methodist Church, P.O. Box 303, Santa Rosa, NM 88435, the Puerto de Luna Senior Citizens Center, 1033 Paisano, Santa Rosa, NM 88435 All services for Mrs. Rasco have been entrusted to the Chavez Funeral Home of Santa Rosa. To place an online condolence please visit our website at www.chavezfuneralhome.com
To order memorial trees or send flowers to the family in memory of Mavis Rasco, please visit our flower store.