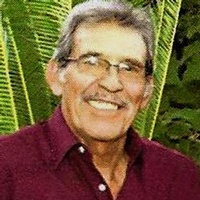 Jose Guadalupe Gallegos, 82 of Tucson, AZ and formerly of Fort Sumner passed away Sunday, April 3, 2016 at St. Mary's Hospital in Tucson following an illness. He was born December 6, 1933 in Dilia, NM the son of Jose Rosauro and Juanita (Casaus) Gallegos. He married Rosie Garcia on September 20, 1952 in Fort Sumner. They made their home in Fort Sumner where Guadalupe worked as a custodian for De Baca General Hospital for several years. Guadalupe and Rosie moved to Tucson, AZ where they made their home and raised their family. Guadalupe worked until his retirement as an office machine technician. He was a member of Our Lady of Fatima Catholic Church in Tucson, he enjoyed yardwork, working on his "Old Cars", watching his NOVELA'S and old western TV shows. Guadalupe is preceded in death by his parents, four sisters Florence Gallegos, Cecilia Greenier, Rosarito Gallegos, and Ernestine Sena, a brother Jose Rosauro Gallegos, and a great-granddaughter Faith Noel Vialpando. Survivors include his wife Rosie Gallegos of the home in Tucson, a son Bobby Gallegos and his wife Diana of Show Low, AZ, five daughters Kathy Ballinger and husband Jesse of Show Low, Tina Gallegos of Tucson, Joanna Trujillo and husband Bobby of Tucson, Emily Rose Gallegos of Tucson, and Elizabeth Brown and husband Bob of Payson, AZ. Also surviving is a sister Elsie Gallegos of Fort Sumner and two brothers Raymundo Gallegos of Alamogordo and Greg Gallegos and wife Rita of Fort Sumner along with 13 grandchildren, 24 great-grandchildren with another expected soon, a host of nieces, nephews, other relatives and many friends. A rosary will be recited at 7pm Wednesday, April 6, 2016 at St. Anthony Catholic Church in Fort Sumner. Mass of Christian burial will be held at 10am Thursday, April 7, 2016 at the church with Father Christopher Bernabe officiating. Burial will follow in the family plot at Fort Sumner Cemetery. Pallbearers will be his grandchildren. All arrangements are under the direction of Chavez Funeral Home, 830 N. Fifth Street, Fort Sumner, New Mexico. (575) 355-2311.
To order memorial trees or send flowers to the family in memory of Joe Gallegos, please visit our flower store.