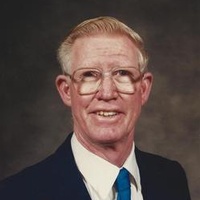 William “Glenn” Russ, 84 a longtime Fort Sumner businessman passed away Wednesday, April 6, 2016 at Covenant Medical Center in Lubbock, TX following a brief illness. Glenn was born February 14, 1932 in Sudan, Texas to the home of Dora Leona Davis and William Hershell Russ. Glenn grew up and attended school in Clovis. Growing up in Clovis, he worked for his father at an auto parts store and machine shop. Glenn married Wanda Miller on June 9, 1951 in Clovis. They moved to Fort Sumner where he worked in the construction of the De Baca General Hospital. They made their home in Lovington for 10 years where Glenn worked in the oil fields, after the oil fields he worked as a mechanic for two auto repair shops in Lovington and later in Clovis. Glenn moved to Fort Sumner when he accepted the position as shop foreman for Withers Chevrolet Pontiac Dealership. In 1970 Glenn opened Russ and Son’s Auto and Truck Repair. After 46 years his sons continue to operate the family business. The Russ family also operated Russ and Sons Ambulance Service from 1971-1982, added a wrecker towing service in 1982, served as an AAA agent for 10 years, and was a U-Haul dealer for 10 years. He also drove a school bus route for 23 years and was a contract bus driver for 43 years. He loved motorcycles and owned a Harley Davidson motorcycle most of his lifetime. Beginning in 1979 the Russ family provided their green convertible Cadillac to transport the Grand Marshall at Old Fort Days Parades. Glenn has served his community well. Glenn was a longtime member of First Baptist Church; he enjoyed bowling, watching NFL and Fort Sumner Fox football games. He is preceded in death by his parents, his wife Wanda Russ on December 13, 2014, three brothers Weldon, Arnold, and Odell Russ, two sisters Evelyn Purselley, and Janeice Nollsch. Glenn is survived by four sons Bobby Russ and wife Joyce of Fort Sumner, Lyle Russ of Fort Sumner, Eldon H. Russ and his wife Sophia of Clovis, and Loyd Russ of Fort Sumner, one sister Janelle Wisner of Overland Park, KS, along with 7 grandchildren, 12 great-grandchildren and a host of nieces, nephews, other relative, many friends, and customers. Visitation hours will be Friday from 11am to 6pm at the funeral home. Funeral services will be held at 2pm Saturday, April 9, 2016 at First Baptist Church in Fort Sumner with Derrill Mitchell and Rev. John Russo officiating. Burial will follow at 6pm (C.S.T.) in Sudan Cemetery, Sudan, Texas. Pallbearers will include Glenn Russ, Luke Russ, Eldon T. Russ, Santiago Lopez, Earl Vandiver, Powhatan Carter, Dennis Cleaver, and Dennis Ready. Honorary bearers will include all his many friends. The family requests memorials in memory of Glenn Russ to The Gideons International, P.O. Box 140800, Nashville, TN 37314. Arrangements are under the direction of Chavez Funeral Home, 830 N. Fifth Street, Fort Sumner, NM. (575) 355-2311. To sign the guest book or place an online tribute go to www.chavezfuneralhome.com
To order memorial trees or send flowers to the family in memory of Glenn Russ, please visit our flower store.