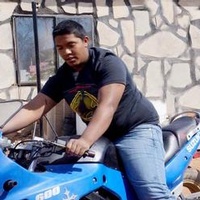 Benerito Cruz Urioste, Jr, age 18, passed away on April 9, 2016 in Anton Chico as a result of a motorcycle accident. Benerito was born on December 6, 1997 in Las Vegas, NM to the home of Benerito and Ruby (Matta) Urioste. He was a senior at Santa Rosa High School preparing for graduation with the class of 2016. He was enlisted in the United States Marines Corps and was set to leave in August. Benerito enjoyed lifting weights, being around his friends and family, fishing, playing Spanish bingo, motorcycles, playing his X-Box, listening to music and "Jordan" clothing and his favorite color was red. At school he was an honor student and was participating in woodshop and welding. Benerito was a member of the San Jose Catholic Church in Anton Chico. He is preceded in death by his grandfathers, Prudencio Villanueva and Benerito Lucero, his Aunts Marcelina Velasquez and Irene Villanueva and his Uncle Larry Matta. Survivors include his parents, Benerito and Ruby Urioste of the family home in Anton Chico, his brothers and sisters Victoria Urioste and Lorenzo Maestas, Rebecca Valentin and Juan, Marcelina Urioste and Richard Saiz, Fabiola Lopez and Oscar, Thomas Urioste and Josie Saiz, Peter Urioste and Isabel Montoya, Faye Urioste and Dori Urioste. Also surviving are his nieces and nephews, Lorenzo, Julian, Cele, Noah, Delisha, Isaiah, Alejandria, Andres, Ismael, Maya, Keila, Arianny, Peter and Jacob, his Grandmother Maria Urioste as well as numerous Uncles, Aunts, Cousins and a host of relatives and friends. Rosary services will be held on Thursday, April 14, at 6:00 PM from San Jose Catholic Church in Anton Chico. Mass of Christian Burial will be celebrated on Friday, April 15, at 10:00 AM also from St. Jose Church with Father Antonio Mondragon officiating. Burial will follow at the Upper Anton Chico Cemetery. Serving as Pallbearers will be Thomas Urioste, Peter Urioste, Victoria Urioste, Rebecca Valentin, Marcelina Urioste, Fabiola Urioste, Dori Urioste, Darren Tenorio and Tony Manzo. All services for Benerito have been entrusted to the Chavez Funeral Home of Santa Rosa. To place an online condolence please visit our website at www.chavezfuneralhome.com
To order memorial trees or send flowers to the family in memory of Benerito Cruz Urioste, Jr., please visit our flower store.