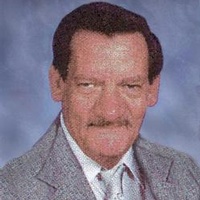 Enrique G. Lovato, 78 of Fort Sumner passed away Wednesday, April 13, 2016 at his home. A rosary will be recited at 6pm Friday, April 15, 2016 from St. Anthony Catholic Church in Fort Sumner. Mass will be celebrated from the church at 10am Saturday, April 16, 2016, with Father Christopher Bernabe officiating. Burial with military honors provided by Cannon Air Force Base Honor Guard will follow at Fort Sumner Cemetery. Pallbearers will include Manuel Barela, Cosme Lovato, Guillermo Lovato, Daniel Sena, George Sena and Bobby Lopez. Enrique was born January 9, 1938 in Fort Sumner to the home of Teodoro and Beneranda (Gonzales) Lovato. He attended and graduated from Fort Sumner High School. Following graduation he enlisted in the U.S. Air Force where he served four years. Enrique made his home in California where he provided data entry and dispatching for a large trucking company. He married Estella Olivas on September 7, 1976 in Las Vegas, NV. Following Enrique's retirement they made their home in Fort Sumner in 1989. Enrique enjoyed gardening, yard work, spending time outdoors and caring for his pet dogs. He was a member of St. Anthony Catholic Church, the Knights of Columbus, and Fort Sumner Columbian Club. He is preceded in death by his parents, his wife Estella in 2010, a sister Juanita Lovato, and two brothers Teodoro Lovato Jr., and Gilbert Lovato. Survivors include a sister-in-law Rebecca Lovato of Los Angeles, CA, a niece raised as a sister, Martha Sena and husband George of Fort Sumner, three niece Dolores Espinosa and husband Jim of Omaha, Nebraska, Joann Lovato of Reeceda, CA, Odilia Lovato of Los Angeles, CA, and a nephew Gilbert Lovato Jr., of Bakersfield, CA, an uncle Rumaldo Gonzales and wife Natividad of Clovis, along with a host of cousins, other relatives and friends. Arrangements are under the direction of Chavez Funeral Home, 830 N. Fifth Street, Fort Sumner, New Mexico. (575) 355-2311.
To order memorial trees or send flowers to the family in memory of Enrique G. Lovato, please visit our flower store.