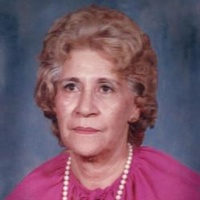 Anita Maria Saiz, 86 of Vaughn, NM passed away at her home Friday, May 6, 2016 following an illness. She was born April 22, 1930 in Pintada, NM to the home of Polito and Julianita (Sena) Saiz. Anita attended schools at Sombrillo and Pintada. Maria made her home in Vaughn for many years. She was employed for Lalo's Cash & Carry for several years. She was a longtime member of St. Mary's Catholic Church in Vaughn. Maria enjoyed cooking, watching TV especially The Price Is Right, Jeopardy, and playing bingo with her friends at the Vaughn Senior Citizens Center. Maria is preceded in death by her parents, three sisters Helen Sanchez, Simona Keen, and Bernice Marquez. Survivors include five children, three daughters Candy Lucero of Albuquerque, Sandra Lucero of Vaughn and Trinnie (Ralph) Rodriguez of Vaughn, two sons Gilbert Lucero and Paul Lucero both of Vaughn, along with one brother Henry Saiz and his wife Sally of Fort Sumner. Also surviving are 12 grandchildren, 18 great-grandchildren along with a host of nieces, nephews and other relatives. Viewing and visitation will be held Tuesday, May 10, 2016 from 9am until service time at the church. The rosary followed by the funeral Mass will be held at 10am Tuesday, May 10, 2016 at St. Mary's Catholic Church in Vaughn. Burial will follow at Evergreen Cemetery, Father Christopher Bernabe will officiate. Pallbearers will include Ezequiel Lucero, Marcos Lucero, Angelo Lucero, Samantha Baca, Lawrence Salazar, Heather Sanchez, Tony Castillo, Aven Lucero, and Christopher Lucero. Honorary bearers will be all her many nieces, nephews, other relatives, and friends. All arrangements are under the direction of Chavez Funeral Home, 830 N. Fifth Street, Fort Sumner, NM. (575) 355-2311.
To order memorial trees or send flowers to the family in memory of Anita Saiz, please visit our flower store.