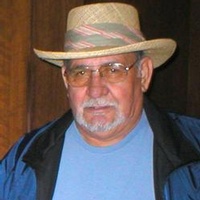 Arturo Gonzales, 82, a lifelong resident of Fort Sumner, NM passed away on May 16, 2016 in Fort Sumner. He was born on August 8, 1933 in Fort Sumner to the home of Rumaldo and Aurora Gonzales. He married Dolores M. Griego on May 23, 1951 in Fort Sumner, NM. Mr. Gonzales was a loving father, son, brother and grandfather. He loved “His” team, the Dallas Cowboys. He also watched all the political news and had his strong opinions and was proud to state his thoughts. He attended school in Fort Sumner. He retired from K Barnett and Sons after 32 years as a heavy machine operator. Then he, along with his brothers, were caregivers of his parents until their passing. Arturo was a member of St. Anthony’s Parish, Knights of Columbus, and a former member of the Eagles. He was preceded in death by his wife, Dolores, of 62 years; his parents--Rumaldo & Aurora Gonzales, in-laws--Max and Patricia Griego, sister--Corina Casaus; son-in-law—Beto Lopez, and nephew—Raymond Casaus. Mr. Gonzales is survived by his six sons—Albert Gonzales and his wife, Dora; Tommy Gonzales and his wife, Yvonne; David Gonzales and his wife, Carol; George Gonzales and his wife, Kathy; Lewis Gonzales; Timmy Gonzales and his wife, Andrea; five daughters –Geneva Gonzales, Diana Lopez, Rose Hernandez and her husband, Jerry ; Geraldine Sena and her husband, Albert; Tina Gonzales; 24 grandchildren, 26 great grandchildren and 1 great great granddaughter; two brothers Demetrio Gonzales and his wife, Corina and Tito Gonzales. A Rosary service will be held at 7:00 p.m. on Wednesday, May 18, 2016 at the St. Anthony Catholic Church in Fort Sumner, NM. Mass of Christian Burial will be held at 11:00 a.m. on Thursday, May 19, 2016 also from the St. Anthony Catholic Church with Fr. Edgar Sanchez officiating. Interment will follow at St. Anthony Cemetery in Fort Sumner, NM. Pallbearers will be his sons and honorary bearers will be all his grandchildren. Mr. Gonzales will be dearly missed by his children, but they are happy knowing he is walking hand in hand with his wife. Arrangements for Mr. Gonzales are in the care of Chavez Funeral Home, 830 N. Fifth Street, Fort Sumner, NM (575) 355-2311. To share a favorite memory or sign the online guestbook, please visit www.chavezfuneralhome.com.
To order memorial trees or send flowers to the family in memory of Arturo Gonzales, please visit our flower store.