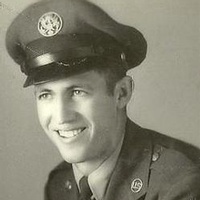 Alex Gazolas, 84 of Vaughn, NM passed away in Albuquerque Thursday, June 16, 2016 following an illness. He was born July 28, 1931 in Vaughn to the home of Jean Leon and Julia (Panebouef) Gazolas. He attended and graduated from Vaughn High School. Following graduation he served in the U.S. Air Force from December 22, 1950 until his honorable discharge on November 27, 1953. His citations and decorations include the Korean Service Medal, United Nations Service Medal, Good Conduct Medal, and National Defense Medal. Alex married Marcella Aragon on December 29, 1962 in Albuquerque. Alex worked along with his father at Western Service Station in Vaughn and later purchased the Western Motel. He continued to operate the service station until 1998. Alex was a member of St. Mary's Catholic Church in Vaughn. He was active in his community as a member of American Legion Post 53 in Vaughn he provided military funeral honors for many area veterans, he was also a member of V.F.W. Post 401, And D.A.V. Chapter 13 in Albuquerque, a Fourth Degree member of the Knights of Columbus. He also served 20 years as a town councilman, and also served as a volunteer with Vaughn E.M.S. and as a firefighter including many years as fire chief. He enjoyed hunting and fishing with his friends including several memorable fishing trips to Eagle Nest. Alex is preceded in death by his parents, a brother Isidro Gazolas and a sister Mary Ann Sikora. Survivors include his wife of 53 years Marcella Gazolas of the home in Vaughn, a son John Gazolas and wife Elizabeth of Albuquerque, three daughters Joan Archibeque and husband Norbert, Julie and husband Toby Garcia, and Jana Taylor all of Rio Rancho along With a sister Virginia Dalesandro of Albuquerque, also surviving are 10 grandchildren. A rosary and funeral Mass will be held at 10am Tuesday, June 21, 2016 at St. Mary's Catholic Church in Vaughn with Father Christopher Bernabe officiating. Burial with military honors will follow at Evergreen Cemetery. Pallbearers will include Corey Archibeque, Nathan Archibeque, Shawn Gazolas, Ryan Garcia, Colton Taylor, and John Sikora Jr. Honorary bearers will include Luke Taylor, Stephanie Garcia, Ashland Taylor, and Reina Gazolas. All arrangements are under the direction of Chavez Funeral Home, 923 S. Third Street, Santa Rosa, NM. (575) 472-3369.
To order memorial trees or send flowers to the family in memory of Alex Gazolas, please visit our flower store.