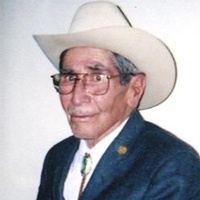 Anastacio V. Silva, affectionately known as “Tacho”, age 95, passed away peacefully surrounded by his family on July 14, 2016 at his home following an illness. Tacho was born January 22, 1921 in Puerto de Luna, NM to the home of Valentin and Maria (Gutierrez) Silva. At an early age Tacho worked as a sheepherder and served in the Civilian Conservation Corps where he received the Cold War Medal. He married Linora Salazar on November 9, 1939 in Fort Sumner, NM. Tacho and Linora moved to California where he worked in the shipping yards as a welder fabricator. Wanting to come back home to New Mexico he and Linora moved back and he began to work as a mechanic for various garages in Santa Rosa and as a County Road Foreman. He then began his own business by opening his own automotive garage. Throughout the years Tacho ran his wrecker service and in the late 1960’s he operated the Ambulance Service in Santa Rosa and was also a farmer and rancher. Tacho enjoyed working on his orchard where he harvested Pecans for many years. Tacho enjoyed politics and served as a Councilman for the City of Santa Rosa for 21 years, he was involved as a volunteer for the St. Rose of Lima Catholic School, he was also a member of the Campos Senior Citizens where he served on the board for many years He enjoyed fishing, playing pool and gardening and working around his home. Tacho was still working around his home 2 weeks before he passed away. He was a Charter member of the Knights of Columbus Council 5146 and St. Rose of Lima Parish. Tacho is preceded in death by his parents, infant twin sons, his sons Christian Silva and Joe Silva as well as all his brothers and sisters. Survivors include his wife Linora of the family home in Santa Rosa, his children; Ernestine Silva of Santa Rosa, Helen Silva Romero of Los Lunas, Vincent Silva and wife Mary of Santa Rosa, Dolores Lucero and husband Max of Santa Rosa, Steven Silva and wife Clarita of Santa Rosa, Frances Marquez and husband Robert of Rio Chama, his daughter in law Florence Silva of Puerto De Luna and granddaughters he helped raise Yvette Silva and Yvonne Loya. Also surviving is his sister Maria Salazar of Roswell, brother in law Santiago Salazar and his nephew Milton Silva of Albuqueruqe, 25 grandchildren, 59 great grandchildren, 20 plus great great grandchildren as well as numerous nieces, nephews and a host of relatives and friends. Rosary services will be held on Friday, July 15, at 6:00 PM from St. Rose of Lima Church. Mass of Christian Burial will be celebrated on Saturday, July 16, at 9:00 AM also from St. Rose of Lima Church with Monsignor Anthony Bolman officiating. Burial will follow at Nuestra Senora de Refugio Cemetery in Puerto De Luna. Serving as Pallbearers will be his grandchildren; Lorenzo Lucero, Christian Silva, Sara Serrano-Buck, Robert Marquez, Jr., Jerry Rodriguez, James Rodriguez, Steven Edward Anastacio Silva, Milton Silva and Joey Silva. Serving as Honorary Pallbearers will be the rest of his grandchildren. All services for Mr. Silva have been entrusted to the Chavez Funeral Home of Santa Rosa. To place an online condolence please visit our website at www.chavezfuneralhome.com
To order memorial trees or send flowers to the family in memory of Anastacio Silva, please visit our flower store.