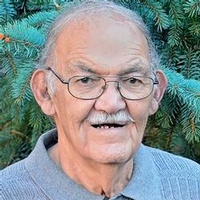 Guadalupe "G.P." Sandoval, 83, a resident of Albuquerque, formerly of Duran, NM passed away Saturday, August 13, 2016 at Lovelace Medical Center. He was born May 14, 1933 in Duran, NM to the home of Abran and Francesquita (Madril) Sandoval. He attended school in Duran and Vaughn where he graduated in 1951. He enlisted in the U.S. Air Force in 1952 and served four years until his honorable discharge in 1956. He served 6 years in the Air Force Reserve and attended Air Police School in Augusta, GA in 1952. G.P. married Sandra S. Sanchez at St. John Baptist Church in Duran on December 2, 1972. They made their home in Duran where G.P. served as Postmaster from 1964-1990. They moved to Vaughn in 1990 and operated the Sands Motel for two years. In 1992 G.P. and Sandra moved to Albuquerque where he worked as Custodial Lead for Goodwill Industries until 1997. Since 1997 G.P. has worked as a Greeter and Hardware Associate for Home Depot #3507. G.P. was a member of Our Lady of the Most Holy Rosary in Albuquerque where he served as an usher for the past 5 years. He was also a member of St. John the Baptist Parish in Duran, and St. Mary's Parish in Vaughn, NM. G.P. was an honorary life member of Knights of Columbus since 1972, he served 10 years as Grand Knight, 3 years as District Deputy, and 2 years as State Youth Director, an active community member, he served two terms on the Vaughn High School Board of Directors, 27 years on the Duran Water Users Association including 22 of those years as secretary-treasurer, a 27 year member of the Duran Fire Department including 23 years as secretary-treasurer, 4 years as Parish Administrator for St. Mary's Parish in Vaughn and also served as Chairman of the church Finance Council, Parish Fiestas director, and Faith in Action coordinator. He was a charter member of St. Joseph Society, Duran, NM. G.P. received many awards for his years of community service including the Quarterly Air Police Award in 1954, Council Knight of the Year from St. Mary's Council, District Deputy and State Youth Director of the Year, and Fireman of the year for Duran Fire Department, and Custodial Lead of the Year for Goodwill Industries in 1992. He is preceded in death by his parents Abran and Francesquita Sandoval, an infant son Timothy Jacob Sandoval in 1981, two brothers Anastacio and Andres Sandoval, and a sister Ramona Sandoval. Survivors include his wife Sandra Sandoval, a son Abran and wife Joyce Sandoval, and daughter Concha and husband Joseph Cordova all of Albuquerque, one sister Teresita Larranaga, and six grandchildren Anyssa Cordova, Jazmin Cordova, Alayna Cordova, Amanda Sandoval, Aubrey Sandoval, and Jacob Sandoval along with a host of nieces, nephews other relatives and many friends and co-workers. A rosary will be recited Thursday, August 18, 2016 by Deacon Norbert Archibeque at 10:15am from Our Lady of The Most Holy Rosary parish in Albuquerque with the Mass of Christian burial at 11am, Father Gene Gries will officiate. Burial with military honors provided by Kirtland Air Force Base honor guard will follow at Mt. Calvary Cemetery. Pallbearers will be Jacob Sandoval, Justin Archibeque, Jared Vigil, Derrek Vigil, Nat Sanchez Jr., Jonathan Marquez, Joseph Sanchez, and Fernando Larranaga. Honorary bearers will include his granddaughters Anyssa Cordova, Amanda Sandoval, Aubrey Sandoval, Jazmin Cordova, Alayna Cordova, God daughters and nieces, Ana Mariposa Belew, Ivory Adkins, Margaret Vigil, and Loretta Massoth. All arrangements are under the direction of Chavez Funeral Home, 923 S. Third Street, Santa Rosa, New Mexico. (575) 355-2311. For additional obituary information or to sign the guest book go to www.chavezfuneralhome.com
To order memorial trees or send flowers to the family in memory of Guadalupe "G.P." Sandoval, please visit our flower store.

Our Lady of the Most Holy Rosary

Our Lady of the Most Holy Rosary