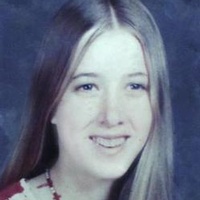 A memorial service will be held at 2pm Wednesday, October 5, 2016 at First Assembly of God Church, 745 El Rito Avenue, Santa Rosa, NM with Pastor Lorenzo Delgado officiating. Interment of cremains will follow at St. Joseph Cemetery in Santa Rosa. Jodie D’arrel Freman, age 57, passed away unexpectedly of August 27 at her home. D’arrel as she was affectionately known was born on December 29, 1958 in Odessa, Texas to the home of Harry Darrel and Virginia Jo (Postelle) Freeman. She was reared and attended schools in Santa Rosa. D’arrel worked with her parents at the Santa Rosa News for many years and also worked construction. She enjoyed making jewelry, traveling and cooking. She is preceded in death by her father Harry Darrel Freeman, her brother Don John Freeman and her daughter in law Christy Freeman. Survivors include her son Antonio Freeman and Lisa of Santa Rosa, her mother Virginia Jo Freeman of Santa Rosa, daughters Naomi and Edna as well as her niece and nephew Sarah and Jaques Freeman along with numerous relatives and friends. All services for D’arrel have been entrusted to the Chavez Funeral Home of Santa Rosa. To place an online condolence please visit our website at www.chavezfuneralhome.com
To order memorial trees or send flowers to the family in memory of Jodie D'Arrel Freeman, please visit our flower store.