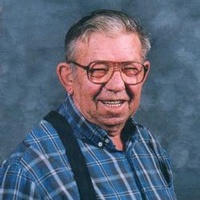 Cornelius John “C.J.” Schilling died September 6, 2016 at the Los Amigos Assisted Living Facility in Santa Rosa, NM. Schilling was born October 21, 1928 to Jacob and Lydia (Martel) Schilling on the family farm located nine miles north and two miles west of Bowdle, SD. He grew up on the farm and attended country school until his family moved to town, where he attended Bowdle High School, followed by a year of college before returning to work to help out his family. He served in the United States Army between 1951 and 1953 and received the Korean Service Medal and the United Nations Service Medal. After his honorable discharge, Schilling served in the Army Reserves for five years. He joined the U.S. Army Corp of Engineers, where he worked as a construction engineer on dam and civil defense projects for 25 years. Working for the Corp of Engineers, Schilling moved where the jobs took him including South Dakota, Missouri, Washington, Montana, North Dakota and finally New Mexico. On April 23, 1959, Schilling married Pauline Erck in Mobridge, SD. Together they had three children, Thomas, Kenneth and Sandra. The family made their home in Santa Rosa in 1976 when Schilling took his final assignment with the Corp of Engineers building the Santa Rosa Dam. After retirement, Schilling owned and operated C.J.’s Engine Service, a small engine and locksmith shop for another 25 years. Schilling was a founding member of the American Legion Post Panteleon Madrid 36, and personally co-signed the loan to purchase the building that houses the American Legion in Santa Rosa. He served Finance Officer for many years, Second Vice Commander, Secretary Recorder and Assistant Bingo Manager. Schilling was preceded in death by his wife, parents and brother, Survivors include son Tom Schilling and wife Linda of Datil, NM; son Ken Schilling and wife Tanya of San Antonio, TX; daughter Sandy Schilling Payne and husband Ken of Hanahan, SC; grandson Jacob Myron Schilling of San Antonio, TX; brother Arnold Schilling of Armstrong, IA; niece Vickie (Schilling) Russo and two nephews, Matthew Schilling and Steven Schilling. He is also survived by special friends Eddie Salazar and Sharon Izbicki. Graveside service with military honors will be held on Friday, September 9, 2016 at 10 a.m. at San Jose Cemetery in Santa Rosa. A memorial bingo will held in his honor at the American Legion Post 36 in Santa Rosa at a later date. In lieu of flowers, donations may be made to the American Legion Post 36 scholarship fund in Schilling’s name.
To order memorial trees or send flowers to the family in memory of C. J. Schilling, please visit our flower store.