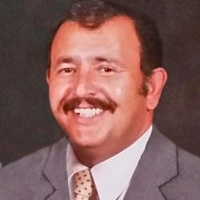 Memorial rosary and Mass for Marchall Lee Rivera, age 71, will be held on Saturday, October 1, at 9:00 AM from St. Rose of Lima Church with Father Sotero A. Sena officiating. Serving as Honorary Pallbearers will be; Andrew Rivera, Richard Rivera, Tim Velasquez, Andrew R. Rivera, Max Rivera and Jerry Hawkins. Marchall passed away on September 26, at the Lovelace Hospice Facility in Albuquerque following an illness. He was born on January 21, 1945 in Johnstown, Colorado to the home of Joseph and Isabel (Lopez) Rivera. He was reared and attended schools in Johnstown and Denver. Marchall served in the United States Army from 1963 until 1965. He met the love of his life, Marsha Allaart on July 31, 1973. Marchall worked in Food Service for many years. He and his wife Marsha made their home in Santa Rosa one year ago. Marchall loved fishing and his family. He was a loving husband, father and grandfather and will truly be missed by his family. Marchall was a parishioner at St. Rose of Lima Parish in Santa Rosa. He is preceded in death by his parents, his son Lee, 2 infant brothers and his sister-in-law Rita Rivera. Survivors include his wife Marsha of the family home in Santa Rosa, his children JoAnn Velasquez and husband Tim of Santa Rosa, Richard Rivera and wife Yesenia of Denver, CO, Andrew Rivera and wife Crystal of Thorton, CO and Monica Rivera of Fort Garland, CO, his grandchildren; Andrew Rivera, Emely Corral, Richard Rivera, Marshall Rivera and Katrina Velasquez. Also surviving are his faithful dogs and cat Coco, Zoey and Moon Shadow, his brothers and sisters Jacob Rivera of San Diego, CA, Max Rivera of Fort Garland, Mary Angela Ayala of Denver, Richard Rivera of Colorado Springs , Mary Elizabeth Keels of Denver as well as numerous nieces, and a host of relatives and friends. All services for Marchall have been entrusted to the Chavez Funeral Home of Santa Rosa. To place an online condolence please visit our website at www.chavezfuneralhome.com
To order memorial trees or send flowers to the family in memory of Marchall Lee Rivera, please visit our flower store.