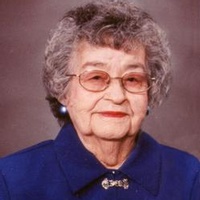 Mrs. Eufelia Rubio 102, of Clovis, NM passed away Tuesday, October 11, 2016 at her home. A rosary will be recited at 7pm Thursday, October 13, 2016 at Our Lady of Guadalupe Catholic Church in Clovis. Mass of Christian burial will be held at 10:30am Friday, October 14, 2016 at Our Lady of Guadalupe Catholic Church, Clovis, New Mexico. Burial will follow at 3pm at St. Joseph Cemetery in Santa Rosa, NM. Pallbearers will include Eddie Rubio, John Sullivan, Billy Joe Apodaca, Julio A. Rubio, Paul Rubio, and Mark Rubio. Honorary bearers will be all her remaining grand and great-grandchildren. Eufelia was born January 22, 1914 in San Ignacio, New Mexico to the home of Juan and Crucita (Gallegos) Lucero. She was one of seven children born to this home. Eufelia married Acencion Rubio on September 24, 1932 in Santa Rosa. They made their home in Clovis, New Mexico. Mrs. Rubio was an longtime member of Our Lady of Guadalupe Catholic Church in Clovis where she served for many years on the church food committee. She loved being with her family, and helped to raise many of her grandchildren. According to her family the door to her home was always open and she always had food prepared for her family and visitors. Mrs. Rubio is preceded in death by her parents, her husband Acencion Rubio in 2006, four children Guadalupe Lopez, Erma Guerra, Eugenia Rubio, and Erma Rubio, grandchildren Kristy Lopez, Lisa Baca, Mark Rubio, and Melissa Hernandez-Duran. All her siblings Monica Chavez, Maxine Hidalgo, Mary Garcia, Luisita Mares, Faustina Zamora, and Orlando Lucero. She is survived by six sons Antonio A. Rubio of Clovis, Julio Rubio and wife Esther of Clovis, Alberto Rubio of Portales, Alfredo Rubio and wife Gloria of Clovis, Eddie Rubio and wife Viola of Clovis, and a grandson raised as a son, Mark Rubio of Clovis, four daughters Cleo Duran of Clovis, Clara Gonzales and husband Reyes of Clovis, Marina Sullivan and husband Jeremy of Clovis and a granddaughter raised as a daughter Carolyn Rubio of Clovis, also surviving are 46 grandchildren, 126 great-grandchildren, 99 great-great-grandchildren and 12 great-great-great grandchildren along with a host of nieces, nephews, other relatives and friends. All arrangements are under the direction of Chavez Funeral Home, 830 N. Fifth Street,Fort Sumner, New Mexico. (575) 355-2311. To place an online tribute or sign the guest book go to www.chavezfuneralhome.com
To order memorial trees or send flowers to the family in memory of Eufelia Rubio, please visit our flower store.