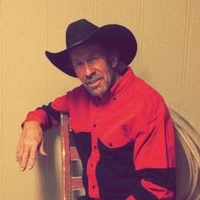 Fredrick "Fred" L. Higgins, 63 of Fort Sumner, New Mexico died Thursday, October 13, 2016 in an auto accident near Yeso, NM. A funeral service will be held at 11am Friday, October 21, 2016 at the Fort Sumner Church of Christ with Pastor Silas Shotwell officiating. Fred was born October 23, 1952 in Tucumcari, New Mexico the son of John and Willa Dean (Cooper) Higgins. He grew up in Cuervo, New Mexico and attended school in Santa Rosa, graduating in 1970. While in high school he participated in Santa Rosa Lion's football. Fred attended Oklahoma State University where he received an Associate Degree in Engineering in 1972. While at O.S.U. he was a member of the college rodeo team and participated in a college rodeo finals in saddle bronc riding. Fred worked in Oklahoma City as a heavy equipment mechanic, he worked for Warren Caterpillar for several years. He also owned and operated a landscaping company for several years. Fred made his home in Fort Sumner in 2011. He worked on area ranches as a ranch hand. Recently he worked for the Overton Ranch and the McCollum ranch as a cowboy. Fred attended the Fort Sumner Church of Christ, according to his daughters Fred especially enjoyed the Wednesday evening services. As a young man, he participated in rodeo bronc riding. He loved spending time with his family, riding horses, reading, and for several years has been writing a book on spirituality. Fred is preceded in death by his father John Higgins Sr. on August 4, 2015, and his mother Willa Higgins on February 15, 2005. He is survived by his children, Christopher Higgins of Pauls Valley, Oklahoma, Tamia Higgins and Olivia Higgins both of Fort Sumner, and three brothers John R. Higgins Jr. and wife Eva of Santa Rosa, Geno Higgins of Fort Sumner, and Joe L. Higgins and wife Theresa of Savannah, Georgia. Also surviving are several nieces and nephews, Gerid Higgins, Geno James Higgins, Joseph Higgins, Shawn Higgins, Annie Higgins, Jennifer Cordova, Maren Higgins, and Everett Higgins. Arrangements are under the direction of Chavez Funeral Home, 830 N. Fifth Street, Fort Sumner, NM. (575) 355-2311.
To order memorial trees or send flowers to the family in memory of Fred L. Higgins, please visit our flower store.