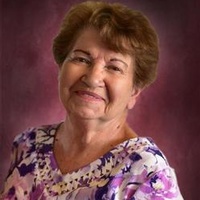 Connie Chavez, age 82, passed away unexpectedly at her home on December 13, 2016. Connie was born on October 1, 1934 in Santa Rosa, NM to the home of Francisco and Leandra (Ulibarri) Baca. She was reared and attended schools in Santa Rosa. Connie married Horacio J. Chavez on October 3, 1952 in Santa Rosa. She worked at the Marquez Home Center as a sales clerk for many years. She later worked at the Sun and Sands Restaurant and The Truck stops of America. Connie was a parishioner at St. Rose of Lima Church where she received the Archbishops St. Francis of Assisi Award that was presented to her at the Cathedral Basilica in Santa Fe. Connie volunteered many hours at the St. Vincent de Paul store, and with the distribution of commodities. She enjoyed caring for and spending time with her twin granddaughters, Sarah and Christine, arrowhead hunting, hiking, listening to Spanish music and keeping the streets clean. To many, she was affectionately known as “Aunt Connie”. She is preceded in death by her parents, her husband Horacio, her daughter Christine Marie Chavez, her sisters and brother, Trinnie Campos, Tina Casaus, Margaret Marquez, Sister Mary Magdalene and Andres Baca. Survivors include her daughter Monica Shank of Santa Rosa, her twin granddaughters, Sarah and Christine Shank of Santa Rosa, two sisters, Maggie Gallegos of Santa Rosa, and Polly Maes of Albuquerque, four brothers Raymond Baca and his wife Marcella of Albuquerque, Frank Baca of Santa Rosa, Gilbert Baca and his wife Vicky of Albuquerque, and Boni Baca and his wife Sylvia of Albuquerque, and a sister in law, Polly Baca of Santa Rosa. She is also survived by special friends, Bud Guinn, Lucy Chavez, Angelica Flores, Ramona Ortega, Anicia Campos and Bennie Griego along with numerous nieces, nephews, and a host of relatives and friends. Rosary services will be held on Friday, December 16, at 10:00 AM from St. Rose of Lima Church with Mass of Christian Burial to follow with Father Sotero A. Sena officiating. Burial will follow in the family plot at St. Joseph Cemetery. Serving as Pallbearers will be Frank Tenorio, Bud Guinn, Dennis Gallegos, Frank Gallegos, Matthew Gallegos, Frank Gerhardt, and Tutor Baca. All services for Mrs. Chavez have been entrusted to the Chavez Funeral Home of Santa Rosa. To place an online condolence please visit our website at www.chavezfuneralhome.com
To order memorial trees or send flowers to the family in memory of Connie Chavez, please visit our flower store.