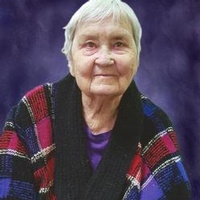 Alice Lou Turner, 89 of Fort Sumner, NM passed away Christmas evening, December 25, 2016 at Retirement Ranch of Clovis. She was born October 5, 1927 in Hartshorn, Oklahoma to the home of Andrew "Bud" McMillan and the former Winnie Irene Irvin. Her father, Bud McMillan died when she was very young and Alice, her siblings and two cousins were raised by her maternal grandparents Frank and Dollie Irvin. She grew up in Double Mountain and Peacock, Texas. She graduated from Peacock High School. Alice married Jim Turner on December 6, 1945 in Big Spring, Texas. They made their home in Fort Sumner in 1963 where Jim owned and operated Turner Drilling Company for many years. Alice was a member of the Valley Quilting Club, P.T.A., Fort Sumner Dance Club, and the Senior Citizen's Center. She enjoyed quilting, making ceramics at the Senior Center, knitting, watching her favorite football team the Dallas Cowboys, and listening to the music of Hank Williams Sr. Alice is preceded in death by her husband Jim Turner on December 3, 2006, her parents, a son-in-law Ricky Cones February 25, 2001, a brother Jack McMillan, and three sisters Jonell McKinzie, June Caldwell, and Pauline Strohl. She is survived by two sons Roy Turner and his wife Linda, Joe Turner both of Fort Sumner, and a daughter Denise Cones of Fort Sumner. Also surviving are two grandchildren, Dawna Cortese and her husband Luke of Fort Sumner, and Jerry Cones and his wife Erin of Muleshoe, TX, five great-grandchildren Jordan Cortese, Joe Preston Cortese, Mary Ann Cortese, Emma Cones, and Carly Cones along with many nieces, nephews, other relatives and friends. Visitation hours will be Thursday from 1pm to 6pm at the funeral home. Funeral services will be held at 2pm Friday, December 30, 2016 from The Church on The Hill in Fort Sumner, NM with Pastor Anna Teeter-Gentile officiating. Burial will follow at Fort Sumner Cemetery. Pallbearers will include Jerry Cones, Luke Cortese, Jordan Cortese,Joe Preston Cortese, Billy Wertheim, and Andrew Sosa. The family requests memorial contributions be made to a charity of your choice in memory of Alice Turner. Arrangements are under the direction of Chavez Funeral Home, 830 N. Fifth Street, Fort Sumner, New Mexico. (575) 355-2311. To place an online tribute or sign the guest book go to www.chavezfuneralhome.com
To order memorial trees or send flowers to the family in memory of Alice Lou Turner, please visit our flower store.