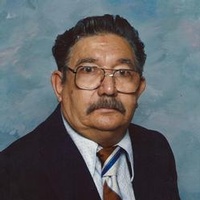 Benny Sena, 88 of Clovis passed away January 1, 2017 at St. Anthony Healthcare Center in Clovis. He was born March 28, 1928 in Fort Sumner to the home of Teodoro and Getrudes (Casaus) Sena. He grew up and attended school in Fort Sumner. At an early age he began working in the cotton and corn fields of Portales, Clovis. Benny Married Dora Irene Gallegos on April 16, 1951 at St. Rose of Lima Catholic Church in Santa Rosa. They made their home in Fort Sumner where Benny raised - in his back yard - cattle, horses, goats, and chickens. He also grew a garden of vegetables every year. Benny worked for many years as a carpenter, his family knew him as the master plaster. He worked for Ray Jax Meat Processing Plant from 1957-1974. He made his home in Dumas, Texas where he worked for New Way Pork, raising pigs from 1976-1982. Benny made his home in Clovis in 2000. He continued to work until age 82 as a maintenance person for Allsup's and Arby's. His friends knew him as the friendly man with the mustache. Benny seemed to always be working and repairing a car, he spent many hours at auto wrecking yards always searching for replacement parts. He always managed to fix and repair the vehicles. His family shared about Benny attending dances as a young man and winning every dance contest with his Jitterbug dancing. He attended Our Lady of Guadalupe Catholic Church, Sacred Heart Parish, and St. Anthony Catholic Church in Fort Sumner. Benny is preceded in death by his parents, his wife Dora Sena in 2012, a daughter Pauline Sena in 2003, two sisters Celia Garza and Agneda Garcia and two brothers Roberto Sena and Mariano Sena. He is survived by a son Jude Sena and his wife Becky of Clovis, four daughters Mary Jane Leung and husband Steve of Princton, NJ, Dora Lucero and husband Nick of Fort Sumner, Linda Carabajal and husband Frank of Midland, TX, and Loretta Sena Martinez of Clovis, one sister Terry Garza of Los Lunas, and two brothers Ted Sena of Clovis, and Blas Sena of Melrose along with 14 grandchildren, and 22 great-grandchildren, several nieces, nephews, other relatives and many friends. Benny also helped raise many of his grandchildren. Visitation hours will be Wednesday from 10am to 4pm and Thursday from 10am to 5:45pm at the funeral home. A rosary will be recited at 7pm Thursday, January 5, 2017 at St. Anthony Catholic Church in Fort Sumner. Mass will be celebrated at 11am Friday, January 6, 2017 at St. Anthony with Father Sotero A. Sena officiating. Burial will follow at Fort Sumner Cemetery. Pallbearers will include Anthony Sena, Jerry Sena, Dory Sena, Jesse Sena, Nick Lucero, and Isaac Coronado. All arrangements are under the direction of Chavez Funeral Home, 830 N. Fifth Street, Fort Sumner, NM. (575) 355-2311. To place an online tribute or sign the guest book go to www.chavezfuneralhome.com
To order memorial trees or send flowers to the family in memory of Benny Sena, please visit our flower store.