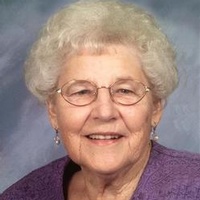 Funeral services for Kate Louise "Muddy" Franklin, age 90, of Tolar, NM will be held at 11am Saturday, January 7, 2017 at First Baptist Church in Melrose, NM with Rev. Durward Woffard officiating. Honorary bearers will be the Dorcas Sunday School Class. Kate Louise Franklin went home to be with her Lord and Savior on Wednesday, January 4, 2017 at Bee Hive Homes of Clovis following an illness. She was born in House, New Mexico on September 12, 1926 to the home of William Young Mitchell and the former Cora Nelson. She grew up in House where she attended school and graduated from House High School in 1944. Kate married Robert (Bob) Franklin on September 12, 1946. Together they ranched at Tolar, New Mexico for many years. She worked alongside Bob on the ranch repairing fences, fixing windmills, and working cattle. She was a great cook and fed many cowboys over the years. Kate was a member of First Baptist Church in Melrose for the past 62 years and Dorcas Sunday School Class, she also served on the church kitchen committee for many years. Kate participated and supported Women On Missions, she loved gardening and quilting and was a longtime member of the House Quilting Club. Kate is preceded in death by her parents, her husband Bob Franklin in 2007, a son Jerry Franklin in 2009, five brothers: Orville, Hugh, George, Glen, and Herman, two sisters: Mary Griggs, and Argie Mitchell. She is survived by a daughter Linda Kay Mitchell and her husband Derrill of Tolar, a daughter in law Carolyn Franklin of Tucumcari, four grandsons Brent Mitchell and wife Julie of San Angelo, TX, Brian Mitchell and wife Holli of Lubbock, Wade Franklin and wife Clayton of Shallowater, TX, and Clay Franklin and his wife Traci of Clovis, along with 9 great grandchildren. Also surviving is a brother W.Y. Mitchell and his wife Della of Clovis along with a host of nieces, nephews, other relatives and friends. The family requests memorials in memory of Kate Franklin to the New Mexico Baptist Children's Home, 2200 S. Avenue I, Portales, New Mexico 88130. The family of Kate Franklin would like to extend their sincere thanks and appreciation to the staff at Bee Hive Homes and Gentiva Hospice for the excellent and compassionate care she received. Arrangements are under the direction of Chavez Funeral Home, 830 N. Fifth Street, Fort Sumner, New Mexico. (575) 355-2311. To place an online tribute or sign the guest book go to www.chavezfuneralhome.com
To order memorial trees or send flowers to the family in memory of Kate L. Franklin, please visit our flower store.