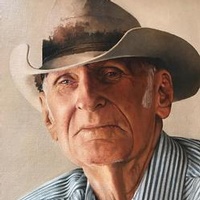 Lewis Galloway Robinson left this world and a loving family at age 95 on January 31, 2017 in Cody, WY. He was preceded in death by his beloved wife, Mary Lea Chick Robinson. They shared 49 years of marriage together. Lewis was born in Taiban, New Mexico on October 24, 1921 to Ben and Tommie White Robinson. He attended High School in Taiban and finished in Ft. Sumner. After graduation, he went on to study business at Lubbock Business School. He always owned his own businesses, whether he was ranching or being a master carpenter. He served as a deacon for many years in several churches and was a member of Cody Bible Church at the time of his death. While living in Durango, Colorado he was a member of the School Board and the Cattlemen’s Association. At the age of 84 he asked for a computer and enjoyed buying and trading stocks online. He was an avid reader and loved crossword puzzles. His true passions were God, family, friends and attending church. He loved a good joke whether he was telling, listening or playing one on someone. He loved to laugh, play games, had many interests and a keen mind. An appetite for all things western, a Louis L’Amour novel, rodeos, his cowboy hat (for his hands and head only), telling stories of his life, cowboy country music (not the new stuff!), his Levi jeans and western shirts… and most of all the true grit you have by just being a cowboy! Dad, Grandpa, Papa and “Papa With The Hat” is survived by 4 children. Daughters: Marsha Jackson (sp. Bruce), Cindy Elliott (sp. David) and Jan Fazzio (sp. Larry) and Son: Levi Robinson (sp. Linda). 17 grandchildren: Scott, Brad, Kim, Shera, Shanna, Jaysha, Garth, Veronica, Trey, Terra, Ike, Jill, Lee Maree, Brandon, Jonathan, Joshua, Jana and 39 great grandchildren. A celebration of Lewis’s life will be on Saturday, 10AM on February 4 at Cody Bible Church in Cody, WY. Visitation will be held from 10am-11am Monday, February 6, 2017 at the Chavez Funeral Home in Fort Sumner. A graveside service will follow at 11am at the Fort Sumner Cemetery, Ft. Sumner, New Mexico. In Lieu of flowers, Lewis suggested that a gift could be given to the Mary Robinson Scholarship Fund at Maranatha Bible College. Local arrangements are under the direction of Chavez Funeral Home, 830 N. Fifth Street, Fort Sumner, New Mexico. (575) 355-2311.
To order memorial trees or send flowers to the family in memory of Lewis Galloway Robinson, please visit our flower store.