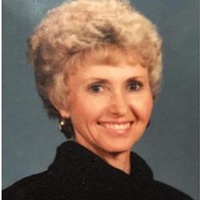 Mary Evelyn Martin, 77 of Estancia, NM passed away Thursday, February 2, 2016 at Lovelace Hospice in Albuquerque following an illness. Her family was at her side. Mary was born March 5, 1939 in Palestine, TX to the home of Lou Etta (Starkey) and Forrest Waller. She grew up in Fort Sumner where she attended and graduated from high school. She attended St. Joseph School of Nursing in Albuquerque. Mary married George Martin on October 11, 1957 in Clovis, NM. They made their home in Estancia, NM in 1965. Mary worked in the insurance business. She was a home maker, and a faithful Church servant as a member of First Baptist Church in Estancia. She also enjoyed gardening. Mary is preceded in death by her mother Lou Etta Waller in 1962, her father Forrest Waller in 1975, and a brother Forrest Wayne Waller in 2008. Survivors include her husband George Martin of Estancia, a son Dwight Martin and wife Abbey and grandson Tye Martin all of Moriarty, granddaughter Kallye Martin Walley and husband Justin of Chattanooga, TN, a sister in law Linda Waller of Clovis, and a brother in law Herbert Martin of Lubbock along with numerous nieces, nephews, other relatives, many friends, and a loving church family. Funeral services will be held at 10am Saturday, February 4, 2017 at First Baptist Church in Estancia, New Mexico with Pastor Wayne Brazil and Pastor Jonathan Richard officiating. Burial will be held at 3pm at Fort Sumner Cemetery, Fort Sumner, New Mexico. Pallbearers will include Tye Martin, Justin Walley, Bill Autrey, John Aday, Mike Harvey, Larry Burnett, and Larry Lawrence. Honorary bearers will include all her many friends and church family. Arrangements are under the direction of Chavez Funeral Home, 830 N. Fifth Street, Fort Sumner, New Mexico. (575) 355-2311.
To order memorial trees or send flowers to the family in memory of Mary Evelyn Martin, please visit our flower store.