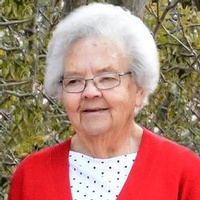 Louise Rodgers, 92 a former resident of Fort Sumner and Logan, NM passed away in Vernon, Texas on Monday, February 6, 2017. Louise was born October 26, 1924 in Poughkeepsie, Arkansas to the home of Kimbrew Barnett Sr. and Sabra Smith Barnett. She married Weldon Rodgers on August 23, 1942 in Taiban, NM. She was a loving mother and homemaker. Weldon and Louise made their home in Fort Sumner until 1983 when they retired to Logan, NM. She moved to Vernon, Texas this past year. Louise is preceded in death by her parents, her husband Weldon Rodgers in 1998, and a son in law Lowell Howard in 1984. She is survived by two daughters Patsy McClung and husband Woodie of Amarillo, TX, LuAnn Holland and husband Ronnie of Vernon, TX a son Bill Rodgers and wife Lanell of Littlefield, TX, one sister Lorene Billingsley of Littlefield and two brothers K. Barnett Jr. of Lubbock, TX, and Bill Barnett of Las Vegas, NM along with 7 grandchildren and 16 great-grandchildren. Visitation will be held at the Church of Christ beginning at 1pm on Thursday, February 9, 2017. Funeral services will be held at 2pm Thursday, February 9, 2017 at Fort Sumner Church of Christ. Burial will follow in the Garden of Love, Fort Sumner Cemetery, Fort Sumner, New Mexico with Mr. Delbert McCloud officiating. Pallbearers will include Charles Rodgers, Scott Howard, Randy Howard, Joel Rodgers, Kevin Holland, and Bob Bradshaw. Arrangements are under the direction of Chavez Funeral Home, 830 N. Fifth Street, Fort Sumner, New Mexico. (575) 355-2311.
To order memorial trees or send flowers to the family in memory of Louise Rodgers, please visit our flower store.