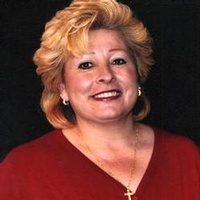 Jeanette "Gina" (Anaya) Encinias, 52, of Santa Rosa passed away Sunday, February 12, 2017 at Alta Vista Regional Hospital in Las Vegas, NM following a sudden illness. She was born February 8, 1965 in Santa Rosa, NM to the home of Horacio and Martina (Flores) Anaya. Gina grew up in Santa Rosa where she attended school. She worked at Pizza Hut in Santa Rosa and later at Truck Stops of America as a clerk for 13 years. She spent many hours reading her bible and for several years cared for "Lindo", her daughter Jenel's, dog. Gina was a member of the Santa Rosa Church of Christ. She is preceded in death by her daughter Jenel Melissa Salazar on May 31, 2000, her paternal grandparents Transito and Lola C. Montoya, her maternal grandparents Toribio and Alicia Flores Salazar, uncles Toribio Flores, Pat Flores, Eduardo Anaya, Eddie Anaya, Fred Anaya, an aunt Edith Anaya and her cousin Roxy Flores. Gina is survived by her parents Horacio and Martina Anaya of Santa Rosa, a brother Gerald Anaya of Santa Rosa, a sister Hope Lucero of Albuquerque, three nephews Angelo Anaya, Justin Anaya, Eddie Lucero, and a niece Josephine Lucero along with a host of cousins other relatives and many friends. Visitation hours will be Tuesday from 1pm to 5pm at Chavez Funeral Home and Wednesday from 12pm to 1pm at the church. Funeral services will be held at 1pm Wednesday, February 15, 2017 at the Santa Rosa Church of Christ, burial will follow at Evergreen Cemetery in Santa Rosa, with Mr. Keith Ross officiating. Casket bearers will be Gerald Anaya, Justin Anaya, Angelo Anaya, Roger Encinias, Paul Gonzales, and Roger Salazar. All arrangements are under the direction of Chavez Funeral Home, 923 S. Third Street, Santa Rosa, New Mexico. (575) 472-3369. To place an online tribute or sign the guest book, go to www.chavezfuneralhome.com
To order memorial trees or send flowers to the family in memory of Jeanette (Gina) Anaya Encinias, please visit our flower store.