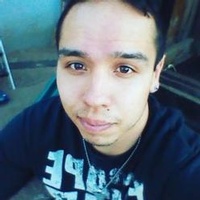 Michael Caleb Sisneros, age 26, passed away unexpectedly at the University of New Mexico Hospital in Albuquerque, Saturday, February 11, 2017. Michael was born on April 1, 1990 in Albuquerque, NM to the home of David and Sandra (Perea) Sisneros. He was reared in Santa Rosa and Edgewood, and graduated from Estancia High School. Michael made his home in Santa Rosa in 2015 and worked as a waiter at the Silver Moon Restaurant. He was a song writer and singer and loved composing songs. He was a special son and had a heart of gold. Surviving Michael are his parents, David and Sandra Sisneros of Santa Rosa, his brother David Joshua Sisneros of Hobbs, his half-brother Fabian Ray Salas, his sister Melissa Tanya Gallegos and his Fiancé Meagan Stroud of Albuquerque. Also surviving is his paternal grandmother Phoebe Sisneros and maternal grandmother Mary Perea along with numerous uncles, aunts, cousins and a host of friends. Visitation hours will be Thursday from 1pm to 5pm at Chavez Funeral Home. Funeral services will be held on Friday, February 17, 2017 at 10:00 AM from the Church of Christ in Santa Rosa with Mr. Keith Ross officiating. Serving as Pallbearers will be Aaron J. Sena, Eric Sena, Clifford Sena II, Robert Sena, Fabian Salas, Fabian Salas, Jr., Carlos Gallegos, Cesar Gallegos, Cordero Gallegos, Cristoval Gallegos, Donnie Trujillo, Robert Lucero II, Francisco Lucero, Andres Soliz Gabriel Soliz and all his many friends. All services for Michael have been entrusted to the Chavez Funeral Home, 923 S. Third Street, Santa Rosa, NM. (575) 472-3369. To place an online condolence please visit our website at www.chavezfuneralhome.com
To order memorial trees or send flowers to the family in memory of Michael Caleb Sisneros, please visit our flower store.