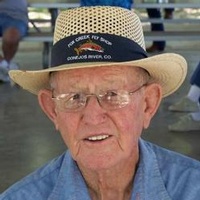 Mr. Bobby Ray Smith, 85 a resident of Fort Sumner, NM since 2014 passed away Wednesday evening, February 22, 2017 at Baptist St. Anthony Hospice of the Southwest in Amarillo, Texas following an illness. He was born May 15, 1931 in Marlow, Oklahoma to the home of Lee and Goldie (Husband) Smith. He was reared in Oklahoma and Roswell, NM. Bobby is a U.S. Navy veteran of the Korean Conflict. He served aboard the U.S.S. Evansville until his honorable discharge on May 21, 1951. Bobby married Carol Ann Klimka on November 23, 1986 in Los Chavez, NM. He worked for many years as a propane distribution manager. He worked in T or C, Espanola, Belen, and in Los Lunas for Ray Bell Oil Company. They made their home in Fort Sumner in 2013 where Bobby raised a vegetable garden each year. Bobby is preceded in death by his parents, a daughter Debbie Harris, and a brother Frank Smith in 2013. Survivors include Carol Ann Smith, his wife of 30 years of the home in Fort Sumner, two daughters Frankie Smith of Missoula, MT, Leslie Harrison of Gillette, WY, five sons Derek "Bud" Smith and wife Cynthia of Hulett, WY, Bobby Ray Smith of Alcalde, NM, Denny Harrison and wife Sue of Gillette, WY, Delbert Harrison of Beach, ND, and Dale Hodges of Albuquerque, one brother Elmer Lee Smith and his wife Vicky of Roswell, along with five grandchildren and two great-grandchildren. A graveside service with U.S. Navy military honors will be held at 11am Tuesday, February 28, 2017, in the Smith family plot, at South Park Cemetery, 3101 S. Main Street, Roswell, NM. Arrangements are under the direction of Chavez Funeral Home, 830 N. Fifth Street, Fort Sumner, New Mexico. (575) 355-2311.
To order memorial trees or send flowers to the family in memory of Bobby Ray Smith, please visit our flower store.