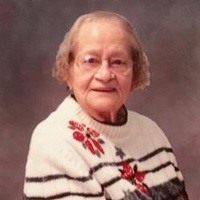 Mary Lott, 91 of Fort Sumner, NM passed away Monday, February 27, 2017 at Clovis Health Care and Rehabilitation Center following an illness. Mary was born on December 4, 1925 in Manhattan, New York to the home of John Isiah Sakir and the former Helen Hilma Soucie. She was reared and attended schools in West New York and New Jersey. She graduated from Memorial High in West New York, New Jersey, and attended college at Eastern New Mexico University. Mary served during World War II in the Woman's Army Corps. She worked for many years as a nurse’s aide at the Roswell Hospital in 1955, later at St. Peters Hospital in New Jersey and at Eastern New Mexico Medical Center until her retirement in 1988. She also worked for Security Bank in Roswell for 5 years. Mary married Edwin Lott on February 11, 1983 in Roswell, New Mexico. She made Fort Sumner her home in May of 1989; she was a member of the First United Methodist Church. Mary loved to sew and write letters. She is preceded in death by her parents, her husband Edwin Lott in 1987, two sisters Alice Rogers in 1986, sister Julia Cramer 2016 and a brother John Sakir 2016. Mary is survived by a son David Crawford, a daughter Patty Eversole and husband Daniel all of Roswell, New Mexico, two sisters; Clara Holton of Tennessee, Hilma Canavera of New Jersey, also surviving are three grandchildren; Joshua, Angelica, and Arron Eversole of Roswell, NM. Services will be held at 10am, Thursday, March 2, 2017, at the First United Methodist Church in Fort Sumner, with Rev. Mike Stahl officiating. Burial will follow at 2pm, at South Park Cemetery in Roswell, NM. Pallbearers will be members of the Methodist Church family. All arrangements are under the direction of Chavez Funeral Home, 830 N. Fifth Street, Fort Sumner, New Mexico. (575) 355-2311.
To order memorial trees or send flowers to the family in memory of Mary Lott, please visit our flower store.