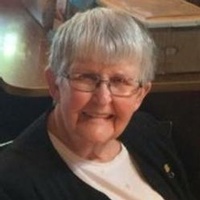 Dorothy Vaughan Chavez passed away unexpectedly on March 5, 2017 at Presbyterian Hospital in Albuquerque. Born on January 13, 1942 in Columbus, Mississippi. Dorothy was deeply loved by her family and friends not only in Santa Rosa but in all the places she lived. She is preceded in death by her beloved husband, Samuel Patrick Chavez; Parents Robert and Sara Vaughan Clayton. Dorothy leaves behind her two loving children, Samuel Clayton Chavez, Sarah Rose Guthrie and husband Warren Tolliver and a precious grandson, Thomas Patrick Guthrie. Sisters, Marion Price and Sally Durrachter and husband Ed. Her loving husbands brothers and sisters, Lucille Chavez Pagone, Jean McCloud, Leroy (Sandy) Chavez, Albert Chavez, Philip (Ingrid) Chavez, devoted friend, Sister Ann, Beloved cousins, Kenny & Lucy Flores and many friends and cousins. Dorothy was a member of the Santa Rosa De Lima Church in Santa Rosa, New Mexico. Dorothy met and married Pat in 1961 in Columbus, Mississippi. In 1964 the couple moved to Albuquerque and was joined by Pat’s father and younger brothers. In 1965 they moved to Plano, Texas then Austin and remained there for 31 years. It was in 1989, encouraged by her husband and two children; Dorothy entered the doctoral program at Texas A&M University, completed a two year residency at College Station and added three years of additional work on her research. In 1995 she was presented her PhD in Environmental Education. A member of Alpah Delta Kappa for 30 years (National Organization for Teachers), Dorothy was a well known educator in Round Rock, Austin and Houston. She retired from the Houston Independent School district in 2002. After Pat’s retirement, Dorothy always believed it was Divine guidance that brought them back to NM. They bought a ranch north of Newkirk, where they built a log cabin overlooking the peaceful valley of Mesa Rica. Their years there brought them great joy and pleasure. They lived a life full of companionship, friendship, and a beautiful sense of family. After Pat’s death, Dorothy remained very involved in the church and community of Santa Rosa. She was an active member of Sisters of St. Joseph Associates, PEO Sisterhood, Catholic Daughters, Cursillo, Santo Nino Church Restoration and volunteered many hours at Santa Rosa de Lima Church. Dorothy returned to Pflugerville, Tx to live with her daughter and grandson in 2010 and recently returned to Santa Rosa. Dorothy believed in her heart Santa Rosa was “her home.” Dorothy was deeply loved by everyone, especially her children. Pallbearers will be Sister Ann and James Reynolds. Rosary will be prayed at Santa Rosa de Lima Catholic Church at 6:30pm on Wednesday, March 8, 2017. Father Sotero Sena will officiate the Funeral Mass at 11:00am on Thursday at Santo Nino Church in Cuervo, NM. Interment will follow at Cuervo Cemetery. A dinner will be served at the Knights of Columbus Hall after services. All services for Mrs. Chavez have been entrusted to the Chavez Funeral Home, 923 S. Third Street, Santa Rosa, NM. (575) 472-3369.
To order memorial trees or send flowers to the family in memory of Dorothy Chavez, please visit our flower store.