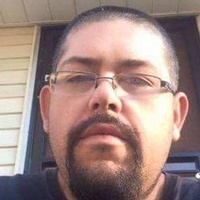 Randy Joe Romero, 33 of Commerce City, CO and formerly of Fort Sumner passed away Thursday, April 20, 2017 at Vail Medical Center, in Vail, Colorado following a motor vehicle accident. Randy was born November 19, 1983 in Albuquerque, NM. He grew up and attended school at Fort Sumner Public Schools. He worked as a plumber's assistant in Fort Sumner for Joe Terrell and Carlos Sena. He made his home in Midland, TX for a two years where he worked as a Journeyman Plumber. He later worked as a plumber in Denver, CO. For the past year he was working for Axium Inspection as a Radon inspector. Randy enjoyed spending time with his daughters, hunting, fishing, and listening to Spanish music. He was a self taught carpenter and enjoyed doing home repairs and helping his family. Randy is preceded in death by his grandfather Manuel Romero in 2004, two aunts, Louisa Romero, and Romana Sena and an uncle George Griego. Survivors include two daughters Claryssa Romero and Marissa Romero both of Fort Sumner, his mother Nancy Romero of Denver, CO, maternal grandmother Annie Romero of Fort Sumner, three brothers Christopher Romero of Roswell, Ricardo Gamez of Albuquerque, and Isaac Gamez of Fort Sumner, aunts Lucy Bassler and husband Chris of Fort Sumner, Theresa Wood and husband Kevin of Fort Sumner, uncles George Romero and wife Donella of Clovis, Orlando Garcia and wife Priscilla of Santa Rosa, and Fred Garcia and wife Bonnie of San Antonio, TX along with numerous great aunts and uncles, other relatives and many friends. An evening prayer service will be held at 6pm Wednesday, April 26, 2017 at the Chavez Funeral Home Chapel in Fort Sumner, NM. The funeral will be held at 3pm Thursday, April 27, 2017 at The Church On The Hill in Fort Sumner with Anna Teeter-Gentile officiating. Burial will follow at Fort Sumner Cemetery. Pallbearers will be Eugene Sena, Francis Martinez, Mike Baltes, John DeLavara, Jerome Sena, Angela Wood, John Spears, and Victoria Sena. Honorary bearer will be Tony Lucero. Arrangements are under the direction of Chavez Funeral Home, 830 N. Fifth Street, Fort Sumner, NM (575) 355-2311.
To order memorial trees or send flowers to the family in memory of Randy Joe Romero, please visit our flower store.