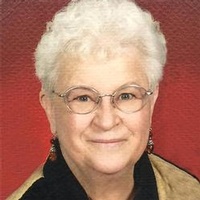 Funeral services for Kathryn (Kate) Edwards will be held at 11am Saturday, May 6, 2017 at the Chavez Funeral Home Chapel in Fort Sumner with Rev. John Rech officiating. Burial will follow in the Edwards family plot at Fort Sumner Cemetery. Pallbearers will include David Edwards, Carl Parmer, Darrin Stafford, Kevin Wedeward, Woody Edwards, Tommy Edwards, and Kenny Edwards. Family and friends may visit the funeral home on Friday, May 5, 2017 from 10am to 6pm. The family will receive friends at the funeral home beginning at 10am on Saturday. Emily Kathryn (Kate) Barnhill Edwards, of Cedar Crest, NM passed away on April 23, 2017 at the age of 78 years old. She was born July 26, 1938 to Lafayette William Barnhill and Flosye Doris Gragg in Roswell, NM. Her infant life began in Dunlap, NM, where her parents were homesteading. While still a toddler, the family moved to House, NM where her parents established the Cross Bar cattle ranch. LW ran the ranch while Flosye taught at House Public School. Kate had many sweet memories growing up at “The Ranch” with her older sister, Beth. While attending school at House she made many lifelong friends and was famous for being the class clown with her “Minnie Pearl” antics. After graduating from high school in 1956 she then attended ENMU in Portales and NM Highlands in Las Vegas. Eventually, she moved to Amarillo, TX where she attended nursing school, graduating with an LPN license in 1960. She worked in several interesting places in Texas and New Mexico throughout her career. Kate married Brown (Brownie) Edwards September 24, 1966, in Santa Rosa, NM. They established their first home in Las Vegas, NM while Brown was still in school. Brownie’s career moved them to several places; they lived in Santa Rosa, Fort Sumner, Gallup, Ruidoso, Hobbs, and then to Clovis in 1982. Kate and Brownie made so many good friends in each community, especially in Clovis where they lived for 25 years, raising their son and daughter. Kate had a loving heart for elderly people, working in several nursing homes while in Clovis. She retired from her nursing career in 1997. Kate and Brownie thoroughly relished their retirement, taking advantage of it heartily. They enjoyed being able to travel and seeing parts unknown. Of course, they were always planning “one more trip”. In 2007 they moved from Clovis to the Albuquerque area to be closer to their grandson, Sam. Kate truly enjoyed being a grandmother to Sam and she also “adopted” other children and filled in as grandmother for anyone that would have her. Kate’s hobbies included reading, baking, and embroidery. Family relationships were very important. She was strong in her Christian faith and frequently participated in church obligations and bible studies. She was also a member of the Order of Eastern Star and The Red Hats Society. Kate is preceded in death by her parents, LW Barnhill in 1970 and Flossie Barnhill in 2003. Survivors include her husband of 50 years, Brown Edwards of Cedar Crest, a son David Edwards and his wife Spring of Cedar Crest, a daughter Laura Edwards and her husband Kevin Wedeward of Socorro, one grandson Sam Edwards of Cedar Crest, a sister Johna Beth Parmer and her husband Bill of Tucumcari, two nieces Jane McCharen and her husband Richard of Oklahoma City, OK , Myra Stafford and her husband Darrin of White Rock, NM and one nephew Carl Parmer of House, NM. Arrangements are under the direction of Chavez Funeral Home, 830 N. Fifth Street, Fort Sumner, NM. (575) 355-2311. To place an online tribute of sign the guest book, go to www.chavezfuneralhome.com
To order memorial trees or send flowers to the family in memory of Kathryn (Kate) Edwards, please visit our flower store.