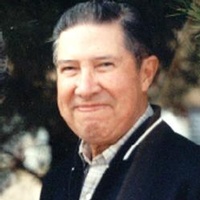 Herman Crestino Baca, age 91, passed away peacefully, at his home in Albuquerque, on June 9, 2017. He was born July 24, 1925 in Bosque, NM to Remelia Peña and Rafael David Baca. The Baca family goes back many generations in New Mexico. He helped his dad on the farm and attended Belen High School. He was drafted into World War II and the U.S. Navy serving on the ship LST-130 from 1943 to 1946. Herman went to New Mexico State University where he received his B.S. in Agriculture in 1950 and Master of Arts in 1966. Weekends in Bosque were spent working on the farm, and then attending the Saturday evening dances in town where he met his future wife, Isabel Abeyta. Herman and Isabel were married on November 30, 1957 at Our Lady of Belen Catholic Church. They moved to Española where Herman was the County Extension Agent for Rio Arriba County. In 1962, they moved to Santa Rosa and Herman worked as the County Extension Agent for Guadalupe County until he retired in 1980. While living in Santa Rosa, Herman was ever-present in the community. He was very active at St. Rose of Lima Church, St. Rose of Lima School, usually volunteering for one event or another. He was a member of the local Knights of Columbus and was always ready to help with the KC mission, including camping trips, bingo and charities. Through his work, he directed the 4-H program in Guadalupe County. Memories were made when Mr. Baca would load up 40-50 kids and adult leaders along with food, tents, their sleeping bags and clothing and head out for the annual Guadalupe County 4-H Campout. He loved travelling and visiting his children and grandchildren. When the grandchildren would visit in Santa Rosa, he was always taking them fishing at Park Lake and to the local baseball/softball games down the street. Every year, he looked forward to planning the trip to the National County Agent’s Convention. These conventions took place in a different state each time. He and Isabel poured through maps and books trying to find the best route to take. He hooked up the camper and the station wagon and the adventure started! In addition to these, Herman was a member of the Lions Club, VFW, NARFE, and American Legion. A favorite pastime of his was going to the Campos Senior Citizens Center in Santa Rosa, visiting friends and shooting pool. During the last 4 years, Herman lived with his son, Herman David, and wife, Anna, and their daughter, Andrea in Albuquerque. Once diagnosed with Parkinson’s, in 2009, Herman gracefully confronted the progressive disease, never complaining and always living life to the fullest. He is preceded in death by his wife Isabel (2000) and infant daughter Mary (1967), as well as his parents, Remelia (1996) and Rafael (1964); his siblings, Dominica(1922), Abelicio (2013), Nila (2012), Lucia (2017), Emilia (2012), Gertrudis (2013), Ruben (2002), Anita (1932), Eutalio (1937), Vidal (1942), Juan Diego (1938), Eloria (2017) Herman is survived by his second wife Mary, and his children Patricia (Dennis) Camell, Carmen (Jody) Doster, Herman D. (Anna) Baca and Yvonne (Steven) Maestas; his grandchildren, Christina, Deanna, Kathryn, and Ashley Camell; Joey and Jesse Flores, James and Amanda Strohmeier, Andrea Baca, and Eddie Maestas. He is also survived by his sisters, Celine Baca, Mary Tearnan and brother Isaias Baca; brother-in-law Dusty (Leslie) Rhoades; sister-in-laws, Mela Sanchez, Angelina Trujillo, Dolores (Ben) Duran, Pauline Abeyta; stepchildren, 3 great-grandchildren, step-grandchildren and step-great-grandchildren. He is also survived by many nieces, nephews and friends. A funeral Mass will be held at 10am Tuesday, June 13, 2017 at San Jose Parish, 2401 Broadway SE, Albuquerque, NM with Father Gabriel Paredes officiating. Visitation will begin at the church at 9am. A rosary followed by a funeral Mass will be held at 10am Wednesday, June 14, 2017 at St. Rose of Lima Catholic Church in Santa Rosa, NM. Burial will follow at St. Joseph Cemetery in Santa Rosa with Father Sotero A. Sena officiating. Pallbearers will be Joey Flores, James Strohmeier, Dennis Camell, Jody Doster, Steven Maestas, Eddie Maestas, and Frank Metzner. All arrangements are under the direction of Chavez Funeral Home, 923 S. Third Street, Santa Rosa, New Mexico. (575) 472-3369.
To order memorial trees or send flowers to the family in memory of Herman C. Baca, please visit our flower store.