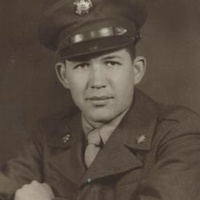 Rosary services for Mr. Gilbert Gerhardt, age 87, will be held on Tuesday, July 18, at 10:00 AM from St. Rose of Lima Church with Mass of Christian Burial to follow with Father Christopher Bernabe officiating. Burial will follow at the St. Joseph Cemetery. Serving as Pallbearers will be Joseph Storey, Jason Storey, Marcus Valdez, Brandon Valdez, Mike Sena, Matthew Montoya, Adolph Romero, Jr. and Victor Anaya. Gilbert passed away peacefully on July 14, at his home in Santa Rosa. He was born on October 26, 1929 in Puerto de Luna, NM to the home of Joe Jesse and Eugenia (Candelaria) Gerhardt. Gilbert joined the United States Army on March 6, 1951 where he served in the Korean War and received the Korean Service Medal and the UN service Medal. He was honorably discharged on March 12, 1953, that year he married Mary Alarid. Gilbert was a long time rancher and farmer, he worked for the New Mexico Department of Transportation and for Sierra Transit Mix for over 30 years. He enjoyed fishing, tending to his cattle, hunting and going to the casinos. Gilbert is preceded in death by his parents, his brother Fred Gerhardt and his nephews Leanord Garcia and Steve Garcia and his son in law L.A. Sena Survivors include his wife Mary of the family home in Santa Rosa, his daughters, Marie G. Sena of Las Vegas, NM, Shirley Garley of Albuquerque, Patsy Romero and husband Adolph of Santa Rosa and Jessica Gerhardt of Santa Rosa. Also surviving is his sister Oma Garcia and husband Ezequiel, his brother Robert Gerhardt and wife Dolores all of Albuquerque, 11 grandchildren, 18 great-grandchildren along with a host of nieces, nephews relatives and friends. Visitation will be held on Sunday and Monday from 1:00 PM to 5:00 PM All services for Mr. Gerhardt have been entrusted to the Chavez Funeral Home of Santa Rosa. To place an online condolence please visit our website at www.chavezfuneralhome.com
To order memorial trees or send flowers to the family in memory of Gilbert Gerhardt, please visit our flower store.