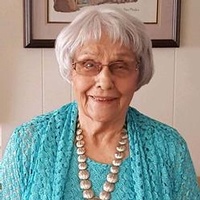 Services for Mrs. Jeanne Good will be held at 11am Thursday, July 20, 2017 at the Fort Sumner Church of Christ with Mr. Tom Oliver officiating. Burial will follow in the Good family plot, Fort Sumner Cemetery. Pallbearers will include Cary Crist, John Crist, Lynney Tucker, Richard Herrera, Terrence Longbrake, Casey Crist, Talen Crist, Benjamin Crist, and Shandon Herrera. Visitation hours will be Wednesday, July 19, 2017 from 1pm to 6pm at the funeral home. The casket will be closed at the funeral. Jeanne Good passed away Monday evening at Lubbock Heart Hospital in Lubbock, Texas following a sudden illness. She was born January 28, 1924 in Raton, New Mexico to the home of Gus and Letha Mae (Anderson) Burson. The family lived in Raton where Gus worked for the railroad. They later made their home in Portales where they farmed before moving to Yeso where the family ranched. Jeanne married Benjamin Franklin Good on January 16, 1942 in Portales. They made their home in Fort Sumner. Jeanne was a rancher's wife and homemaker. She was a member of Eastern Star, Cowbelles, and a longtime member of the Fort Sumner Church of Christ. She enjoyed needle point, cross stitch, and cooking. A loving wife, mother, and grandmother she is preceded in death by her husband Ben Good in 2001, and her parents Gus and Letha Burson. Survivors include three daughters Bennie Jeanne Crist (Clay) of Yeso, Kathy Longbrake (Terry) of Brownfield, TX, and Terri Tucker (Donny) of Lubbock, TX, five grandchildren, Cary Crist, John Crist, Kendra Herrera, Terrence Longbrake, and Lynney Tucker, 10 great-grandchildren and two great-great-grandchildren along with a host of friends, her church family, and good neighbors. The family prefers memorial contributions to the NM Christian Children's Home, 1356 NM-236, Portales, New Mexico 88130. Arrangements are under the direction of Chavez Funeral Home, 830 N. Fifth Street, Fort Sumner, NM. (575) 355-2311. To place an online tribute or sign the guest book, go to www.chavezfuneralhome.com
To order memorial trees or send flowers to the family in memory of Jeanne Good, please visit our flower store.