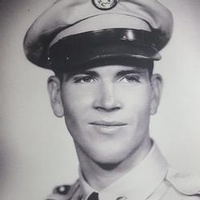 Billy Tom Duke, 86 of Fort Sumner, NM passed away at his home early Friday morning, August 25, 2017. He was born October 24, 1930 in Littlefield, Texas to the home of William Thomas and Annie (Fowler) Duke. He attended school in Littlefield until the 8th grade when the family moved to a farm in the Fort Sumner valley in 1944. Bill attended Fort Sumner schools and graduated in 1950. Following graduation Bill worked on the construction of the Diversion Dam. He enlisted in the U.S. Army on March 20, 1951 and served until his honorable discharge on February 18, 1953. He served in the U.S. Army reserves until October 16, 1956. Bill married Jo Ann Hutson at the First Baptist Church in Fort Sumner on November 21, 1954. Bill worked as an Agent for the Santa Fe Railroad from 1953 until he joined the Farmers Electric Cooperative as a lineman in November 1954. Bill worked for Farmer's Electric for 38 years until his retirement in 1993. He was a past member of the Odd Fellows Lodge in Fort Sumner and for many years participated in the men's and mixed bowling leagues. He enjoyed vacationing in Ruidoso and taking trips to Red River with his family. He was a stay at home grandfather for his grandchildren. Bill is preceded in death by a daughter Beth Sparks on May 21, 2013, his parents, all his siblings, brothers Hollis, Carl, and Cecil Duke, sisters Ruth Coffman, and Edith Morris. Billy is survived by Jo Ann Duke, his wife of 62 years of the family home in Fort Sumner, a son John Duke (Barbara) of Fort Sumner, grandchildren Wendy Abeyta of Clovis, John Wylie (Jessica) of Kansas, Marla Duke (Kolter West) of Portales, and Brandan Duke of Portales, one great-granddaughter Autumn Long of Fort Sumner along with many nieces, nephews, other relatives and friends. Visitation hours will be Monday from 1pm to 6pm at the funeral home. Funeral services will be held at 10am Tuesday, August 29, 2017 in the Chavez Funeral Home Chapel with Rev. Jim Peabody officiating. Burial will follow at Fort Sumner Cemetery. Casket bearers will include Kolter West, Brandan Duke, John Wylie, Steve Gallegos, Bob Addison, Hubert Marshall, and Knox Cortese. Honorary bearers will include Russell Crownover, Ronald Stoner, Dr. Jack Vick, and Glen Holland. All arrangements are under the direction of Chavez Funeral Home, 830 N. Fifth Street, Fort Sumner, New Mexico. (575) 355-2311.
To order memorial trees or send flowers to the family in memory of Billy T. Duke, please visit our flower store.