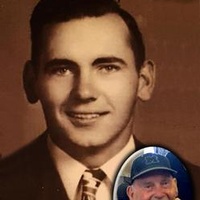 Marion Lecil Richards passed this life on October 23, 2017 at the age of 89 years. Marion was born on September 18, 1928 at the family farm in Dora, NM to Robert L. Richards and Bessie Avelyn Bennett Richards. He graduated from Dora High School in 1944 and began teaching and coaching in Causey, NM in 1944 at the age of 18. Marion played basketball and football in high school and for Eastern New Mexico University where he obtained his Bachelors Degree in Education. He obtained his Master's Degree from Western New Mexico University in 1961. Marion and Mary Jo Turner Richards were married on October 26, 1948. Three sons and one daughter were born of this marriage. In addition to teaching and coaching in Causey, Dora, Penasco, and Roswell, NM, Marion was principal at Mountain View Elementary and mid-school, Walker Air Force Base, seventeen years at Berrendo Middle School and was the superintendent of the Chaves County Independent School District until its consolidation with the city. Marion was an educator for 37 years and retired in June of 1983 to follow his passion for fishing and hunting. Unfortunately, he suffered an accident in May of 1984 that rendered him quadriplegic for over 33 years. Marion was an avid sportsman and athlete in addition to being a devoted Christian. He was an elder at West Alameda Church of Christ in Roswell, NM for over 33 years where he was a mainstay of said congregation. He and Mary Jo opened their home to anybody and everybody and all were welcome. They entertained friends, family and guests at least once a week. Marion participated in The Senior Superstar Competition for many years and diligently jogged at least 5 miles a day until his injury. He dearly loved hunting and fishing and spent as much time as possible enjoying such activities. Marion was inducted into The Educators Hall of Honor at Eastern New Mexico University in 2012. Survivors include his wife, Mary Jo Richards of Lubbock, children Lecil and Pam Richards, Fort Sumner; Damon Richards, Lubbock; Quata Richards, Lubbock; R.L. and Christi Richards, Muleshoe. Grandchildren Tahnee and Chad Elliot, Ryder and Sue Ann Richards, Jerrett Richards, Lacy Richards, Brooks and Misty Jobe, Lexa and Andrew Dahl-Bredine, Jace and Audra Richards, Zane and Jessie Jobe, Elizabeth and Logan Capps, Jaben and Savannah Richards, Nicole and Tyler Anthony, Skyler Richards, Levi Richards, and Victoria Richards. Great grandchildren Alexa Elliott, Kieran Elliott, Gracey Taylor, Dalley Jobe, Grace Dahl-Bredine, Ellie Anthony, River Dahl-Bredine, Tule Dahl-Bredine, Weston Capps, Gentry Capps and Remi Anthony (due in November). Marion's surviving siblings Max and Nell Richards, Clyde and Ruth Richards, Lynda and Fount Schultz, and Kay and Roy Gatewood. He is preceded in death by siblings Wanda Baczik, Jimmie and AnnaBeth Richards. A memorial and celebration of life service will be held at The Texico School Auditorium at 2:00 pm on Friday, October 27, 2017 with Bill Morrison officiating. Honorary bearers will include Tahnee Elliot, Ryder Richards, Lacy Richards, Brooks Jobe, Lexa Dean Dahl-Bredine, Zane Jobe, Elizabeth Capps, Nicole Anthony, Levi Richards, Victoria Richards, Jerrett Richards, Jace Richards, and Jaben Richards. The family requests that in lieu of flowers memorial contributions in Marion's honor may be made to Eastern Plains Athletic Conference (EPAC) at REC 6, P.O. 847 Portales, NM 88130. Arrangements are under the direction of Chavez Funeral Home, 830 N. Fifth Street, Fort Sumner, New Mexico. (575) 355-2311. To place an online tribute or sign the guest book go to www.chavezfuneralhome.com
To order memorial trees or send flowers to the family in memory of Marion (M.L.) Lecil Richards, please visit our flower store.