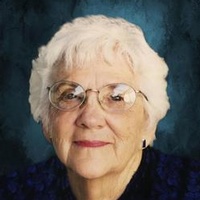 Services for Frances Hall Fikany of Taiban, NM will be held at 10am Thursday, October 26, 2017 at the First United Methodist Church in Fort Sumner with Rev. Alan and Rev. Suzanne Brockmeier officiating. The family requests memorial contributions to NM Grand Assembly, International Order Rainbow for Girls, or the Blanco Cemetery Fund. Both may be mailed to P.O. Box 1606, Taiban, New Mexico 88134. Frances Hall Fikany, 93 was born July 8, 1924 in Clovis, New Mexico to the home of Milton and Agnes (Partan) Brown. She passed away Monday, October 23, 2017 at P.R.M.C. in Clovis following an illness. She grew up in Clovis where she attended schools and graduated from Clovis High School in 1942. Frances married Benjamin Franklin Hall on June 19, 1942 at her parents home in Clovis. They made their home on the Ben Hall Ranch south of Taiban. Frances served for over 20 years as a member and chairman of E.N.M.R.S.H. Board, and as chairman of Mental Health Resources Board. She was a member of Powderhorn Cowbelles since 1962, a member of Melrose Chapter #30 O.E.S. since 1942, P.E.O. Chapter G in Clovis, and a longtime member of St. John's Episcopal Church in Fort Sumner. Following the death of Ben Hall in 1998, Frances married Dr. Edward Fikany on August 25, 2000 at the Jones Law Firm in Santa Fe. He preceded her in death on October 27, 2002. Frances enjoyed needlepoint and was a charter member of the New Mexico Needlepoint Guild, she loved making ceramics, and as a cattle rancher, she raised registered Longhorn cattle. She made her home on the family ranch until 2013 when she moved to The Wheatfields Senior Living Community in Clovis. Beside her two husbands, Frances is preceded in death by a son Ben Edward Hall in 1985, a step son David Fikany in 2014, and three sisters Agnes Cummins, Grace Schlotterback, and Malcolm Withers. Survivors include a son David Hall and wife Judie of Denver, CO, daughters Susan Hall of Santa Rosa, NM, Mary Gay McClain and husband Rod of the family ranch south of Taiban, and step daughter LeaAnn (Fikany) Curry and husband Alan of Albuquerque. Also surviving are 11 grandchildren, Ryan Hall of Denver, Grant Hall of Denver, Gary Beverage and wife Trina of Artesia, Judy Beverage of Tucumcari, Shannon Harcrow and husband Don of Roswell, Taylor McClain of Taiban, and Morgan McClain of Fort Sumner. Step grandchildren Erin Curry, Tara Curry, of Chandler, AZ and Blake Curry and Anna Curry of Albuquerque, 12 great-grandchildren, and 2 great-great grandchildren, along with two nieces Agnes Simmons of Coppell, TX and Mary Veselka and husband Marvin of Austin, TX. All arrangements are under the direction of Chavez Funeral Home, 830 N. Fifth Street, Fort Sumner, NM. (575) 355-2311. To place an online tribute or sign the guest book go to www.chavezfuneralhome.com
To order memorial trees or send flowers to the family in memory of Frances (Hall) Fikany, please visit our flower store.