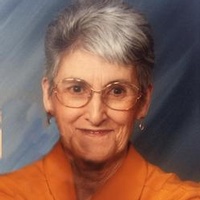 Barnedith May "Barney" Vick, age 95 of Clovis and formerly of Fort Sumner passed away Sunday, November 5, 2017 at Retirement Ranch in Clovis. Her family was at her bedside. Mass of Christian burial was held at 11am Monday, November 6, 2017 at St. Anthony Catholic Church in Fort Sumner, burial followed at Fort Sumner Cemetery with Father Sotero A. Sena officiating. Her family served as pallbearers. She was born March 27, 1922 in Lancaster, Minnesota to the home of Joseph and Elizabeth (Mondiville) Lusignan. She grew up in Lancaster and moved to California in 1942 where she met and married Richard Oran Vick on May 22, 1943. While living in Los Angeles, she worked in an aircraft factory. She travelled with her husband who was in the service. They made their home in Fort Sumner where Barnedith worked at Howe Drug Store for 9 ½ years and at the Fort Sumner School cafeteria for 3 years. She was a member of St. Anthony Catholic Church in Fort Sumner and Sacred Heart Parish in Clovis. She is preceded in death by her husband Richard “Dick” Vick in 2002, a son Richard Vick in 1967, her parents, three sisters Barbary Boisner, Rosella Braun, Roseann Melby, three brothers Elmo, Zefer, and Clifford Lusignan. Barnedith is survived by two daughters, Gloria Love and husband Bob of Lubbock, Texas, and Connie Bryant and husband David of Clovis, four grandchildren and 4 great-grandchildren. All arrangements were under the direction of Chavez Funeral Home in Fort Sumner. (575) 355-2311. To place an online tribute or sign the guest book, go to www.chavezfuneralhome.com
To order memorial trees or send flowers to the family in memory of Barnedith May Vick, please visit our flower store.