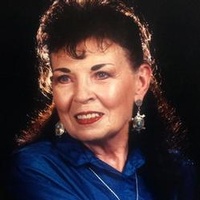 Virginia "Jean" Hancock, 92 of Fort Sumner, NM passed away Monday, November 20, 2017 at her home with her family at her bedside. Virginia was born January 6, 1925 in Newmarket, NH to the home of George Frank and Velma Gertrude (James) Walker. She attended schools in New Market and graduated from New Market High School. Following graduation she attended a secretarial school in Boston, MA.  Jean decided she wanted to meet a cowboy. She moved to Fort Worth, Texas where she worked in a hotel restaurant in the Fort Worth Stockyard district. It was there that she met Woodrow Wilson "Sonny" Hancock. They were married January 7, 1946 in Tularosa, New Mexico. They made their home on the Hancock Family Ranch on the Pecos River between Roswell and Fort Sumner. Sonny was an original member of the CTA, Cowboy's Turtle Association which later became the PRCA, Professional Rodeo Cowboy Association. He and Jean traveled for years on the Professional Rodeo Circuit. In 1952 they bought a ranch south of Fort Sumner and a farm in the Fort Sumner valley where they made their home to raise their children. Jean and Sonny made their home in Nipomo, California from 1965-1967. They came home briefly in 1967 to allow Lewis to graduate from Fort Sumner High School. They returned to Nipomo in 1969 where Jean worked as a bookkeeper and managed the Rancho Bowl in Santa Maria, CA. She was a successful and professional bowler and a longtime member of the Women's International Bowling Congress. They made their home in Nipomo until 1981 when they made their permanent home in the Fort Sumner Valley where they lived the remainder of their lives. Jean continued to bowl with the local bowling leagues and attended many state tournaments. Jean was an accomplished artist, she began with pencil drawings in high school and later painted with oils and pastels and acrylics. Some of her oil paintings hung in the NM State Capitol in Santa Fe for many years.  She later took up wood burning and was featured in the New Mexico Magazine article on her wood burning, “burning memories”. She was also a poet and author. She was a charter member of the Billy The Kid Outlaw Gang and authored the book “Ode to Billy”. Jean attended First United Methodist Church in Fort Sumner. She is preceded in death by her parents, her husband Sonny Hancock on August 27, 1997, two brothers Lewis Walker, Tom Walker and three sisters Pearl Robinson, Nathalie Walker, and Margaret Jackson. Survivors include a daughter Elayne Horney and husband Paul of Yeso, NM and a son Lewis Hancock and wife Jackie of Fort Sumner, a brother George Walker Jr. and wife Shirley of New Hampshire. Also surviving are 3 grandchildren Paul (Franshel) Horney IV of Russellville, Arkansas, Shane (Ben) Quezada of Frisco, TX, Chad Horney of Yeso, NM. five great-grandchildren Danielle (Darryl) Ferguson of Russellville, AR, Aaron Horne of Ft. Lewis WA, Jacob Horne of Golden, CO, B.J. Quezada of Frisco, TX, and Ally Quezada of Stillwater, OK, three great-great grandchildren Brady, Oliver, and Hazel Ferguson of Russellville, AR along with numerous nieces, nephews other relatives and many friends. A graveside service will be held at 11am Friday, November 24, 2017 at Fort Sumner Cemetery with Pastor Marvin Pounds officiating. Pallbearers will include Paul Horney III, Ben Quezada, William Hancock, Paul Horney IV, Chad Horney, Lewis Hancock, and Jacob Horne. Visitation hours will be Thursday, November 23, 2017 from 6 - 8 pm at the funeral home.The family requests memorial contributions in memory of Virginia "Jean" Hancock to: Justin Cowboy Crisis Fund, 101 Pro Rodeo Drive, Colorado Springs, CO 80919 or Fort Sumner Cemetery Association, P.O. Box 180, Fort Sumner, NM 88119. All arrangements are under the direction of Chavez Funeral Home, 830 N. Fifth Street, Fort Sumner, New Mexico. (575) 355-2311.
To order memorial trees or send flowers to the family in memory of Virginia Hancock, please visit our flower store.