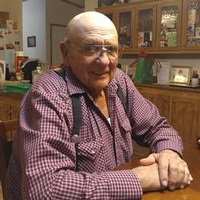 Leslie Harold Maupin, age 77, passed away at his home west of Melrose on Saturday, December 2, 2017 following an illness. He was born August 9, 1940 in Fort Sumner to the home of Lee Roy and Vera Mae (Dodd) Maupin. At the age of 14 he moved to Washington where he attended high school in Concrete, WA. He married Marianne Brewer in 1957. Leslie served in the U.S. Army during the Vietnam War. He received the Vietnam Service Medal, a Marksman medal, and Rifle Sharpshooter medal. He was assigned to B Company First Battalion, First Infantry Division. He was honorably discharged on December 9, 1965. Leslie held several jobs but being a cowboy was his passion. He worked and made his home for many years on the Hill Ranch west of Melrose. He enjoyed fishing, hunting, attending church, and card games with his family and friends. Leslie married Barbara Jean Davis in 1966. He is preceded in death by his parents, his wife Barbara Jean Maupin, and a sister Jan McGehee. Survivors include four sons Les (Spike) Maupin and wife Gail of Vadar, WA, Gene Maupin and wife Araceli of Bakersfield, CA, Will Maupin and wife Deborah of House, NM, Ronald Comstock of Washougal, WA, four daughters Cyndi Franklin and husband Jay of Castle Rock, WA, Deborah Provence and husband Bill of Las Cruces, Vera Lee Herrera and husband Norbert of Fort Sumner, and Sharrie Baughman and husband Jeff of Kelso, WA. Also surviving is his dear friend Sandra Hill along with 23 grandchildren, 39 great-grandchildren, and 1 great-great-grandchild along with a host of other relatives and many friends. Funeral services will be held at 2:00 pm Wednesday, December 6, 2017 at First Baptist Church in Melrose. Burial will follow at House Community Cemetery, House, NM. Rev. Durwood Wofford will officiate. Pallbearers will include Brian Osborn, Matt May, Tyson Henry, P.J. Loomer, Monte Provence, and Josh Provence. Honorary bearers will include all his many friends and family. Visitation hours will be Tuesday from 1pm-7pm at the funeral home. The family will receive friends from 5pm-7pm. The casket will be open at the church from 1pm until service time. Memorial contributions may be made to League Home, 7000 Amarillo Blvd West, Amarillo, TX 79106. www.leaguehome.org Arrangements are under the direction of Chavez Funeral Home, 830 N. Fifth Street, Fort Sumner, New Mexico. (575) 355-2311.
To order memorial trees or send flowers to the family in memory of Leslie Maupin, please visit our flower store.