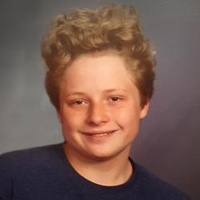 Max Gauna McMullin, 15 of Albuquerque passed away at his home Thursday evening, December 7, 2017 following a valiant battle with osteo-sarcoma. His family was at his bedside. Max was born September 14, 2002 in Albuquerque. Max was an athletic, musical and all around smart kid. He attended Inez, and Monte Vista Elementary and Jefferson Middle School. Max is survived by his mother Margaret, brother Bob, his father Bobbie McMullin, grandparents Virginia and Louis Gauna, and Joe McMullin, aunts and uncles Carol and Joe Pohl, Barbara and Steve Trujillo, Jennifer and James Casaus, Louie and Rebecca Gauna, Carolyn and John Pesko, Buddy and Kelly McMullin, Steven and Margaret McMullin and lots of cousins and extended family along with his pets Baby, Peanut, Suave, and Kitty Kitty who were a great comfort to him through his illness. A burial and committal service was held at 2pm, Saturday, December 9, 2017 in the Gauna family plot of Evergreen Cemetery, Vaughn, New Mexico. A memorial service for friends and family will be held at 2pm Saturday, December 16, 2017 at Strong-Thorne Chapel, 1100 Coal Avenue SE, Albuquerque, NM. In lieu of flowers the family requests donations in Max's name to Children's Cancer Fund of NM, 112 14th Street SW, Albuquerque, NM 87102 or go online to www.ccfnm.org Arrangements are under the direction of Chavez Funeral Home, 830 N. Fifth Street, Fort Sumner, New Mexico. (575) 355-2311. To place an online tribute or sign the guest book, go to www.chavezfuneralhome.com.
To order memorial trees or send flowers to the family in memory of Max Gauna McMullin, please visit our flower store.