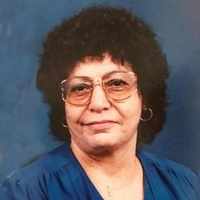 Rebecca Lovato, 87 passed away Friday, December 4, 2017 at Hollywood Presbyterian medical Center in Hollywood, CA following an illness. She was born May 30, 1930 in Fort Sumner, NM to Pablo and Odelia (Sena) Casaus. Rebecca married Gilberto Lovato on September 4, 1953 in Fort Sumner, NM. They made their home in Fort Sumner and then moved to Los Angeles, CA where they resided for over 50 years. She was a stay at home mom raising her children and helping raise grandchildren, also babysitting for other people. She was well liked by everyone who came in contact with her. She liked to joke around a lot especially with the younger crowd. During her stay at the nursing home even if she didn’t feel well herself she did her best to help the other residents with their needs. She loved music. If she was feeling down all you needed to do is turn on some music and she would snap right out of it. She was full of energy and life when she was listening to music. She was really proud of her family. She would often say that she prayed every night and asked God to watch over them and she would name them all and it took take quite a long time due to there being so many. Rebecca is preceded in death by her parents; husband Gilberto Lovato; sister Macedonia Lovato; brother Henry Casaus; son Henry Lovato and granddaughter Cindy Sena. Survivors include daughters, Dolores Espinoza and husband Jim of Omaha, NE, Odilia Lovato of Los Angeles, CA, JoAnn Lovato of Reseda, CA, Martha Sena and husband George of Fort Sumner and son Gilbert Lovato of Bakersfield, CA; 24 grandchildren; 44 great-grandchildren and 12 great-great grandchildren A memorial service was held on December 14 at Hollywood Forever Funeral Home in Hollywood CA with Fr. Aidan Comerford leading prayer of rosary and service. Local services will be held at Saint Anthony Catholic Church on February 3, 2018 at 10 a.m. with Fr. Sotero Sena officiating. Burial of cremains will follow at the Fort Sumner Cemetery.
To order memorial trees or send flowers to the family in memory of Rebecca Lovato, please visit our flower store.