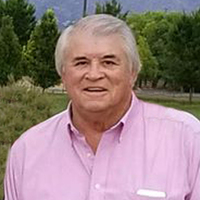 Albert Graciano Dominguez, 73, formerly of Tucumcari, NM passed away at Northwest Texas Hospital in Amarillo, TX on Friday, November 22, 2019. Albert was born on August 4, 1946 to the home of Juan Dominguez and Epimenia (Ortega) Dominguez in Newkirk, NM.  He was reared in Tucumcari where he also attended school.  Albert was a soldier who proudly served his country in the Vietnam War.  Following his service, Albert worked for the Tahlequah Public Schools as Transportation Director, retiring in 2006.  He was a parishioner at Saint Anne’s Catholic Church and was a member of the Tucumcari VFW and Elks Lodge.  On December 2, 2018 he moved to Hobbs, NM to be near his daughter.  Albert loved to fish and watch sports, however, his greatest joy came from the time he spent with his family and particularly his great-grandchildren. Albert is preceded in death by his parents, Juan and Epimenia, his grandparents, his wife; Willa J. Dominguez and brothers; Ray Dominguez, Juan Dominguez and Concepcion Dominguez. Albert is survived by his daughter; Michelle Dominguez of Hobbs, NM, grandson; Tyler Dominguez and wife Lilly of Hobbs, granddaughter; Lacrisha Dominguez Harris and husband Kaleb of Denver City, TX, brothers; Joe Dominguez and wife Betty of Albuquerque and Dennis Dominguez of San Marcos, TX and sisters; Beatrice Cassidy of Albuquerque and Barbara Moates of Ocean Springs, MS as well as 6 great-grandchildren and several nephews, nieces, family and friends. Visitation will be from 6-7 PM at Saint Anne’s Catholic Church in Tucumcari, NM on Tuesday, November 26, 2019, followed by the Recitation of the Most Holy Rosary at 7:00 PM.  The Mass of Christian Burial will be on Wednesday, November 27, 2019 at 10:00 AM at Saint Anne’s, celebrated by Father John Paul Afuecheta.  Burial will follow at Tucumcari Memorial Park with Tyler Dominguez, Kaleb Harris, Buddy York, Johnny Dominguez, Arty Molinas and Larry Brown serving as Pallbearers.  Honorary Pallbearers are; Sue Dowell, Reyez, Mykah, TJ, Mila, Xaelah, Xaidi (Mikey) and Vince Dominguez. All services have been entrusted to Chavez Funeral Home, 923 S. Third St., Santa Rosa, NM  88435.  575-472-3369. To place an on-line tribute please visit www.chavezfuneralhome.com.
To order memorial trees or send flowers to the family in memory of Albert Dominguez, please visit our flower store.