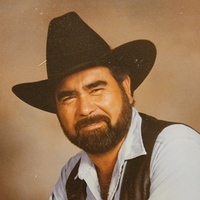 Alfred Romero Sr, 69 passed away at his Clovis, NM home on Monday evening, December 19, 2022 surrounded by his family. He was born May 29, 1953 in Los Angeles, California to the home of Juan and Clorie (Rivera) Romero. Alfred was raised in Santa Rosa and Clovis, NM. He attended public schools in Santa Rosa and graduated from Clovis High School. Alfred married Irene Vela on June 26, 1972 in Clovis, NM. Alfred worked for the Guadalupe County Road Department for several years and later worked for Vela Concrete, and at the Clovis Livestock Sale Barn. He retired in 1997. Alfred and Irene made their home in Clovis in 1986, they were members of Our Lady of Guadalupe Catholic Church. Alfred loved to hunt, fish and spend time with his livestock, he also enjoyed welding, and working on projects at his home. He enjoyed western movies, playing games on his I-Pad. He especially enjoyed the time he spent with his family. He is preceded in death by his dad, Juan Romero on August 2, 2010, a daughter Mary Esther Romero on February 12, 2012, his mother in law Frances Jaquez-Vela on June 13, 1986, father-in-law Claudio Vela on October 23, 2009, and his sister Bertha Romero on May 3, 2009. He was a loving husband, father, son, grandfather, brother, and friend, and will be missed by his wife Irene Vela-Romero of Clovis, his mother, Clorie (Rivera) Romero of Clovis, three sons Alfred Romero Jr. (Margaret) of Clovis, Michael Romero (Janie) of Albuquerque, Theodore Romero of Clovis, three daughter Frances Romero (Michael Cordova) of Clovis, Teresa Romero of Clovis, and Klaudia Romero-Cordova of Clovis, also surviving are 7 grandchildren, 5 great-grandchildren, four brothers Edward Romero (Lilly) of Clovis, Juan Romero Jr of Clovis, Joe Romero (TJ) of Clovis, Philix Romero (Nicole) of Clovis, five sisters, Margarita Garcia (Mel) of Clovis, Diane Chavez (Pat) of Clovis, Christine Mundell (Gary) of Rio Rancho, Bernice (Kent) Salazar of Rio Rancho, and Eloise Romero of Lubbock, TX along with a host of nieces, nephews, other relatives and many good friends. Holy Rosary will be recited at 1:00 pm Thursday, December 29, 2022 from Our Lady of Guadalupe Catholic Church in Clovis, NM. A reception will follow at Our Lady of Guadalupe Parish Hall. The funeral Mass will be celebrated at 12:00 noon on Friday, December 30, 2022 from St. Rose of Lima Catholic Church in Santa Rosa, NM with Father Sotero A. Sena officiating. Interment will follow at St. Joseph Cemetery in Santa Rosa. Pallbearers will include Timothy Romero, Estevan Romero, Diego Romero, Gabriel Romero, Caressa Romero, Theodore Romero, and Michael Cordova. Honorary bearers will include all his grandchildren. Arrangements are under the direction of Chavez Funeral Home, 830 N. Fifth Street, Fort Sumner, New Mexico. (575) 355-2311.
To order memorial trees or send flowers to the family in memory of Alfred Romero Sr, please visit our flower store.