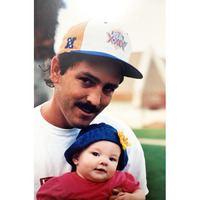 Andrew Luna, 54 of Santa Rosa passed away at his home on Wednesday, October 16, 2019 following an illness. He was born November 28, 1964 in La Mesa, California to the home of David and Linda Luna. He grew up in El Cajon, CA where he attended Granite Hills High School. Andrew worked various construction jobs and as an electrical technician at the 32nd Street Naval Base. Andrew enjoyed flying remote control airplanes, riding his motorcycle, and woodworking. According to Andrew's daughter, her favorite memory of Andrew was the road trips from San Diego to Santa Rosa and Puerto De Luna, spending days at Blue Hole and Park Lake and always riding with her dad on his motorcycle. Andrew is preceded in death by his mother Linda Luna on January 1, 2014, a brother Gene Luna on March 30, 2017, his paternal grandparents Emilio and Irene Luna, and his maternal grandmother Margie Grant.  Survivors include a daughter Ariel Luna of Lemon Grove, CA, his father David Luna of Santa Rosa, and a brother Larry Luna of El Cajon, CA. Cremation has taken place, a graveside memorial service will be held at 2:00 pm Sunday, November 3, 2019 at El Calvario Cemetery in Puerto De Luna, NM. Honorary bearers will include Tony Kenyon, David Pagel, Gary Pagel, Scott Jordan, Peter DiSanto, and Donald Gutierrez. Arrangements are under the direction of Chavez Funeral Home in Santa Rosa. (575) 472-3369.
To order memorial trees or send flowers to the family in memory of Andrew Luna, please visit our flower store.