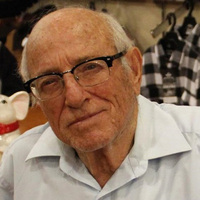 Arthur Abran Gallegos, 93, of Santa Rosa, NM, passed away peacefully on Sunday, January 23, 2022 at home with his wife, Esther holding his hand. He was born on March 2, 1928 in Las Vegas, NM to the home of Evaristo A. and Magdalena Duran-Gallegos. He grew up in Vaughn and Las Vegas, and later moved to Santa Rosa. During his school years he participated in theater and was an All-Star baseball and basketball player. Arthur received his bachelor's of business administration from University of New Mexico in 1951. He was active in intramural sports at UNM and participated in basketball and baseball in the city league in Albuquerque. Arthur served in the United States Air Force for 2 years during the Korean war. He was honorably discharged after the death of his father so he could manage the family business. O.K. Clothiers was founded in 1935 by his parents, Evaristo and Magdalena Gallegos. Arthur and Esther opened Fashion Fantasy in 1978. Arthur owned and ran O.K. Clothiers until it closed in 2019. Arthur always believed that local stores are more than a place to purchase needed items, they're a place to meet and greet our neighbors. He would frequently have hours-long conversations with his many friends. He was a life-long member of the Catholic church. He was also a Charter Member of the Knights of Columbus. Arthur met the love of his life, Esther Alarid in 1953. They were married on August 31, 1959. They had 5 children. In his free time Arthur loved to golf at the Tres Lagunas Golf Course with his friends. Proving his skill, he even hit a hole in one! Arthur was president of the Santa Rosa Chamber of Commerce during the 1960's. It was during his tenure that the Chamber purchased the large Santa Claus that still stands on the courthouse square during the holidays. He is preceded in death by his parents Evaristo A. and Magdalena Duran Gallegos; siblings: Evaristo Gallegos Jr., Mary Sanchez and Christina Valdez. He is survived by Esther Gallegos, his loving wife of 63 years. His children, Jude Gallegos and wife Wanda of Santa Rosa; Jacqueline Gallegos-Rivera and husband Eddie of Rio Rancho; twins Adam Gallegos of Santa Rosa and Aaron Gallegos of Albuquerque; and Adrian Gallegos of Los Angeles. He had 5 grandchildren and several great-grandchildren. Pallbearers will be Diego Gallegos, Donovan Gallegos, Jordan Gallegos, Dennis Gallegos, Eddie Rivera and David Junick. Honorary pallbearers will be Judith Gallegos, Megan Gallegos, Michael AJ Gallegos and Andre Cordova. Visitation will be Thursday, January 27, 2022 from 2-6 pm at Chavez Funeral Home in Santa Rosa. Recitation of The Most Holy Rosary will be Friday, January 28, 2022 at 11 am followed by the Mass of Christian Burial. Services will be officiated by Father Timothy Meurer. All services are under the direction of Chavez Funeral Home, 923 S. Third St., Santa Rosa, NM 88435. 575-472-3369. To place an online condolence or tribute, please visit www.chavezfuneralhome.com.
To order memorial trees or send flowers to the family in memory of Arthur A. Gallegos, please visit our flower store.