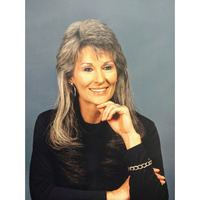 Barbara Gail (Elliott) Tomsco, 76 of Brenham, Texas passed away on Tuesday, April 21, 2020. She was born January 31, 1944 in Clovis, New Mexico to the home of William "Bill" and Audrey Reed "Super Granny" Elliott. Barbara is preceded in death by her parents, her sister Nancy Sluis and a brother James (Jim) Elliott. She is survived by her brother Phill Elliott and his wife Connie of Brenham, Texas, sister-in-law Lola Bell Elliott of Littlefield, Texas, two nieces Leslie Kelley-Scott of Round Rock, Texas, Jaime Williams of Corpus Christi, Texas, and two nephews Scott Elliott of Brenham, Texas and Clayton Elliott of Thrall, Texas. In the 1960s and 70s Barbara wrote songs recorded by The Fireballs, Carolyn Hester, Ray Price, The Shondells and The Smother’s Brothers to name a few. She was married to George Tomsco of the Fireballs. Although she did not perform with the Fireballs she wrote and co-wrote much of their material and hosted many practice sessions in their home in Clovis. She did perform with George Tomsco as a back-up singer on the Kansas City Opry in the 1980s. One of her prize possessions was a Martin guitar built the same year she was born, 1944, which was a gift to her from her brother Phill. Barbara had a beautifully rich singing voice, an ear for harmony, a quirky wit and was an elegant lady. When asked what she wanted written on her headstone she replied “Oops!” A family graveside service and interment was held at 2:30 pm in the Elliott Family Plot, Fort Sumner Cemetery, on Tuesday, April 28, 2020 with Dr. Joe Bunce, Pastor of First Baptist Church officiating. Her family served as pallbearers. Please share a memory or sign the online guestbook at www.chavezfuneralhome.com Local arrangements were under the direction of Chavez Funeral Home, 830 N. Fifth Street, Fort Sumner, New Mexico. (575) 355-2311.
To order memorial trees or send flowers to the family in memory of Barbara Tomsco, please visit our flower store.